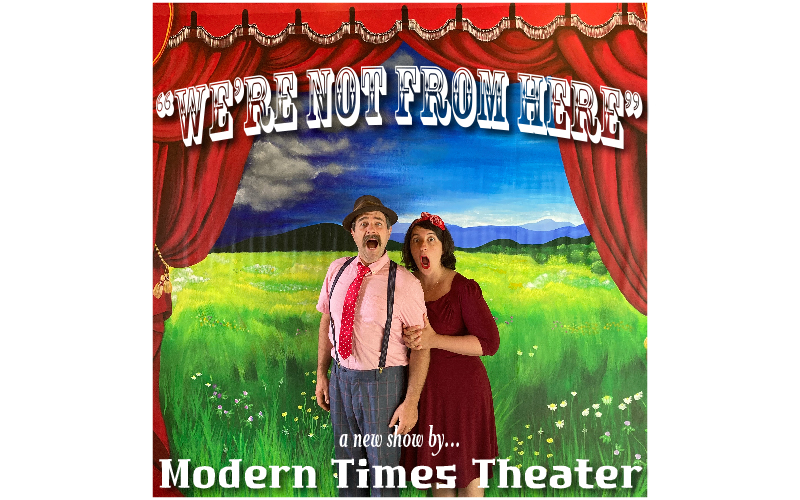 Modern Times Theater is performing its latest show, “We’re Not From Here,” at the Warren Town Hall at 4 p.m. on Sunday, November 20. This free performance is sponsored by the Warren Arts Committee with additional funding from the Friends of the Warren Library. It is family-friendly but geared towards older children, teenagers and adults.

“Arriving from elsewhere, just in time for the show, veteran vaudeville entertainers Rose Friedman and Justin Lander will present a million years in just under 60 minutes. A carpetbag of old-fashioned amusements. Music, puppetry, and schtick. They will attempt to summon the ghosts from the attic to answer our most pressing questions, including ‘How did we get here?’ ‘Where are we going?’ and ‘Can’t you do that somewhere else?’” a press release said. “This production was funded by a Creation Grant from the Vermont Arts Council and is intended specifically for presentation in small historic venues throughout Vermont.

“Modern Times Theater has been making and touring puppet shows and variety acts and creating public community events since 2007. They pursue a radically divergent model of art-making, creating venues in unlikely locations, and revitalizing the historic, run-down, and defunct. Working in populist theater forms, they seek to reinvent and reimagine classic American entertainment. Co-founders Rose Friedman and Justin Lander are a husband-and-wife duo, producers for Vermont Vaudeville and alumni of the Bread and Puppet Theater.”

Modern Times has been touring the show this fall and has brought it to Montgomery, Calais, North Hyde Park and Plainfield. Next up, they’ll be taking it to Hudson, New York.