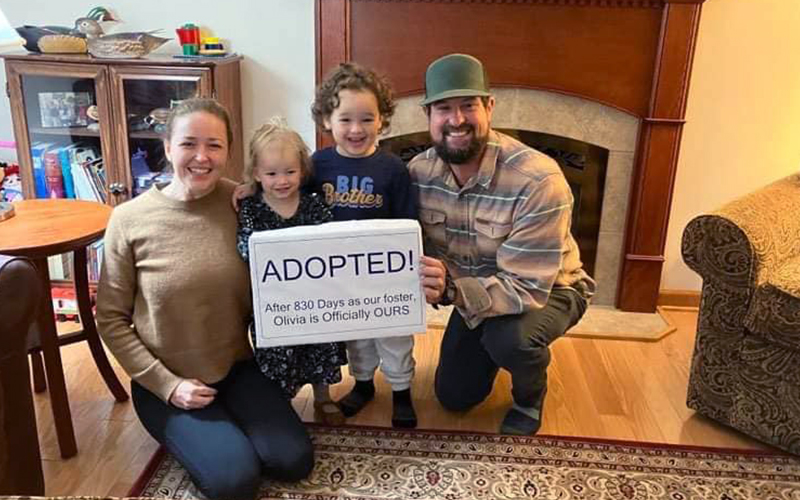 Rebekah Stone and Mike Bishop, Warren, recently announced the adoption of their daughter on November 9 in The Valley Reporter. Their daughter Olivia Bishop was adopted after 830 days as their foster daughter and joined her biological brother Emerson, adopted in January 2021.

Stone and Bishop were not actively seeking to start a family or adopt or even undertake a long-term foster when they began fostering their son Emerson in May 2019.

Seeking a way to give back to the community, Stone, who grew up in Georgia and Bishop, who is adopted and raised in Essex Junction, had become certified to provide emergency medical and short-term fosters in cases where parents were hospitalized or unable to care for kids on a very short-term basis.

“What I was doing was glorified babysitting, but I felt like it was one way I could help out without diving deep into the world of fostering. It was a lighter way that I could help,” she said.

On May 24, 2019, she got a call at work, at the Sugarbush Real Estate office in Waitsfield.

“The Department of Children and Families (DCF) had a case that was not an emergency medical case but they couldn’t find a placement for this two-month-old infant and they wanted to know if I’d be willing to foster this child for two weeks while they found a placement for him. I called Mike, who at the time was managing a musical tour,” Stone said.

The call from DCF specified that she needed to pick the baby up that same afternoon at Central Vermont Medical Center. She and Bishop agreed to the two-week foster and she headed to Berlin with a quick stop at Walmart for an infant car seat. The baby was not there and and after some more red tape and phone calls, she picked up Emerson at a pediatrician’s office and headed home.

“And this community had filled our entire house with baby gear, diapers, wipes, a crib, toys, clothes, shoes. I hadn’t told anyone but my boss Cindy Carr and she called my good friend Alex Morse who set a phone chain into action. Two dozen people contributed baby gear,” Stone said.

Something happened, she said, once she saw Emerson.

“The moment I saw him, it was over. I was crazy in love and I had amplified emotions like I’d never experienced. It was so profoundly intense that there was no questioning myself and I second guess everything. With that litle guy, it was so simple. It felt natural,” she said.

Bishop was still on tour but when hecame home, his reaction was as profound as hers.

“It was the sweetest thing just watching him melt into a puddle,” she said.

After two weeks, they told DCF they’d be happy for Emerson to stay as long as he needed to be in care. They met with his birth mom who told them she was not in a position to parent the baby and she wanted him to stay with them.

They settled in fostering and ultimately beginning the adoption process which took until January 21, 2021. Bishop left the music industry and began workig in construction. During that time, Emerson’s birth mother got pregnant again and they stayed in touch with her.

"She was optimistic and hopeful that she’d be able to parent successfully. We had visits with her during her pregnancy and weekly picnics with her. But then she went into labor at 32 weeks and asked me to come be with her. I was there with her when Olivia was born on Feburary 28, 2020, and the first person to meet her. She weighed 3.01 pounds and it was five months before she was strong enough to come home,” Stone said.

After Olivia was released from the NICU, she was fosterd by a retired couple who lived close to the hospital because her medical needs were too great to be as far away as Warren.

DCF prioritizes keeping siblings together and Olivia’s birth mother wanted them to be together if she couldn’t parent.

“Adoption is the most intentional process. The adoption process is very long. We were able to jump a couple of steps because Emerson’s birth mom wanted him, and then Olivia, to be with us,” Stone said.

While they worked their way through the process, they were raising Emerson, now 3 1/2 years old, and Olivia, 2 1/2 years old. They maintained a relationship not just with their birth mother, but other members of her family who want the kids to know that they are loved, despite the fact that neither they nor their birth mother can raise them.

“I want to be able to answer my kids proudly when they ask as adults ‘what did you do for my birth mom?’ I can answer that honestly and say I did X, Y and Z. We continued to have relationship  - it wasn't just a matter of removing them,” she explained.

Stone credited many angels who helped shepard them through the process including the staff at Sugarbush Day School, her employer, Sugarbush Real Estate and Bishop’s employer New School Builders. She praised the staff at Warren School, and the preschool program who helped in innumerable ways.

“So many people have reassured me and let me take a breath and shown me that we’re not doing this alone,” she said. That includes her husband’s parents, her friend Alex Morse, who spearheaded the baby supply effort on the day Emerson came home.

“Our kids just came to us. We felt we were still putting down roots and the idea of having a family was perpetually five or six years down the road. And now here we are. Our kids, we were meant to be together. We were meant to be a family,” Stone added.