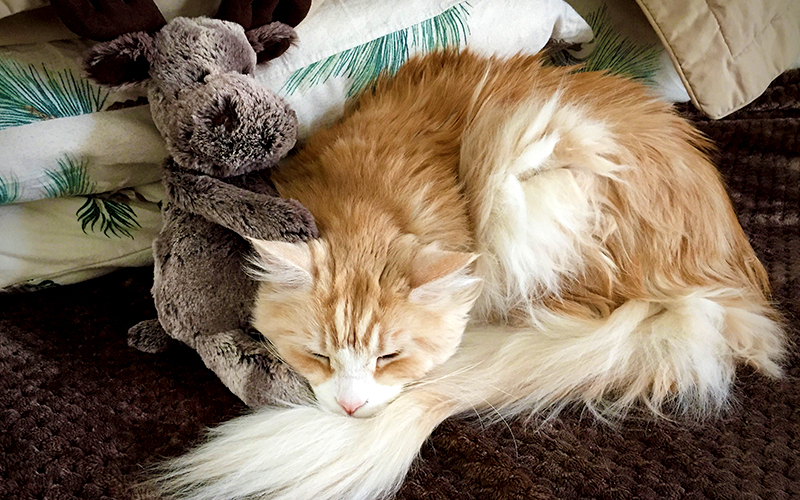 Attention! Cat story ahead -- despite this being the dog issue.

“He started hiding and he wouldn’t eat. He had trouble walking and his back legs stopped working at all. He was dragging himself around on the floor,” said Eckhart.

Initially their vet Dr. Roy Hadden wasn’t sure what was wrong, but thought he might have feline coronavirus. He did some blood work which came back positive for the virus, Eckhart recalled.

“This version of the virus can be fatal to cats. They basically fill up with fluid and suffocate. Roy has seen a few cases of those. Antares did not get better and we took him back to Roy to be euthanized. He could not walk, just crawl,” Eckhart said.

But Dr. Hadden wasn’t ready to give up on him yet. He told Eckhart and Sharlow that Antares had always been healthy and urged them to try and treat him.

“Roy said if we can get him to eat and at least feel better maybe he can beat this. He gave us meds to make him feel better, kill the pain and meds to make him hungry so he’d want to feed. Over four to five days, he started responding and coming back,” Eckhart said.

Two years on, Antares is fine, or “a terror” as Eckhart said. The only indication that he’d had the feline coronavirus is that he can no longer stick his tail straight up in the air.

“Apparently the feline coronavirus attacks different parts of the body. If it attacks the head or brain, it is fatal. We were lucky with Antares that it attacked his rear legs. We were really lucky,” Eckhart added.