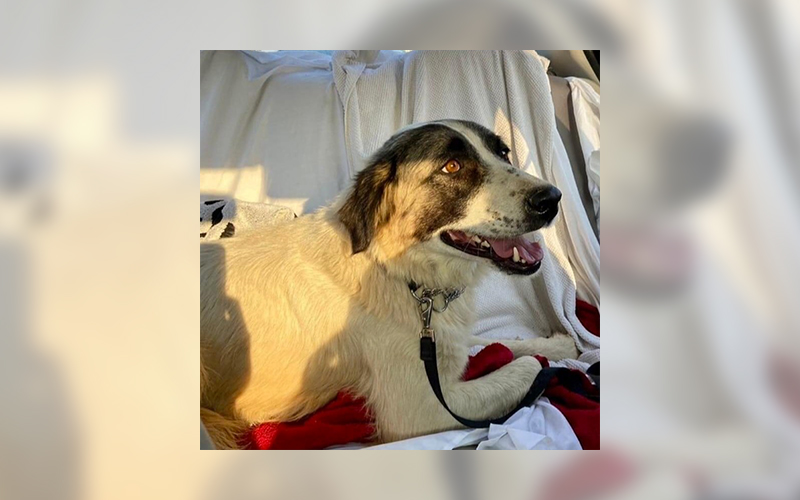 “Oumi was a tireless mama street dog, constantly tending to her litters of puppies in tucked away alleys and vacant lots,” said Kristen Getler, Roxbury. “Now she gets to be the baby; we’re going to spoil her rotten with love and care. We are so happy to provide a loving home where her only job is to be a happy dog.”

It was only a few days after Christmas when Getler and her spouse, Nicholas Laskovski, introduced 4-year old Anatolian-mix Oumi to her new home: a Roxbury farmstead with plenty of pastures to frolic in and animals to befriend.

Before coming to the U.S. through the Waitsfield-based dog rescue, For the Love of Dogs Vermont, Oumi was living as a stray on the streets of Erbil, Iraq. That’s where Montreal-born United Nations worker Rose Guevremont first discovered her.

When Guevremont saw Oumi for the first time two years ago, Oumi was running across a vacant lot with a puppy in her mouth. “I’ve been in love with this dog since I’ve known her,” said Guevremont. “I was constantly thinking about how I could take her out of Iraq.” However, having had no success finding homes for Oumi’s puppies, Guevremont was doubtful that anyone would want to adopt full-grown Oumi.

It wasn’t until last October, when Guevremont and her spouse bought a home in Montgomery, Vermont, that Guevremont decided to try her luck with Vermont-based dog rescues. When For the Love of Dogs Vermont agreed to help Oumi find her forever home, Guevremont started arranging Oumi’s trip.

The journey was a 10-hour flight, with connections, that covered over 10,000 miles. On December 16, Oumi left Iraq from Erbil International airport, landed in New York at JFK, and then was put on a flight to Burlington, Vermont, before she got to meet her new family for the first time on the Stowe bike path.

According to Laskovski, Oumi is settling into her new home quite well. “In a few short days, she has gone from being permanently tense and rigid to learning how to wag her tail and lounge like a dog,” said Laskovski. “These are likely some of the first nights of her life where she has experienced absolute silence without having to be on guard.”

Now, Guevremont is working with For the Love of Dogs Vermont and the Society for the Prevention of Cruelty to Animals (SPCA) to coordinate another transatlantic canine rescue. Guevremont wants to save Oumi’s last litter and bring them to Vermont.

“There are five puppies. They are all female, which is amazing, because that means five less dogs giving birth in the streets,” said Guevremont.

The puppies have already received their vaccines and will be ready to travel soon. “I might come back in March with the puppies. We are going to find them all homes in Vermont,” said Guevremont. “It’s going to be quite the adventure.”