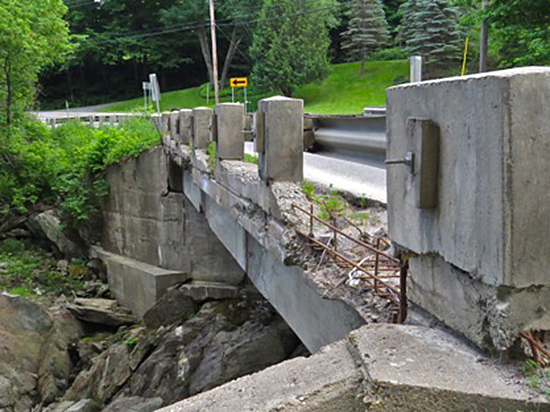 Moretown resident Gary LeBoeuf took some pictures of the state bridge over the Mad River at the southern entrance of Moretown Village and forwarded them along to The Valley Reporter, alarmed at what he saw.

The pictures show crumbling curbs and crumbling posts, but, according to Wayne Symonds, Vermont Agency of Transportation structures design engineer, the bridge is still solid and safe.

LeBoeuf said he is worried about the public using the bridge and said that residents had raised the issue with VTrans in the late 1990s and the bridge was pronounced safe.

Symonds said that with that particular type of bridge the cosmetic impact of the curb and posts crumbling is deceiving. He said that the state's August 2013 inspection of the bridge shows it to be in fair condition based on three elements of assessment, the deck, the super structure and the substructure.

The super structure, he said, are the longitudinal element, or the beams under the deck, and the substructure are the abutments that hold up the bridge.

"They all rate fair, on a scale of 1 to 10, 10 being unattainable perfect condition. This bridge gets ratings of 5. Ratings of 4 would be where it starts to be in poor condition. A rating of 3 would usually become a safety issue and a bridge with a rating of 2 is generally closed," Symonds said.

"The deck portion, inside of the curb, that is carrying the load is in pretty good shape. This type of bridge is a concrete T-beam bridge where the beams and deck are cast together in reinforced concrete and they tend to be a very robust system that, even though at times doesn't look great, still have a very good carrying capacity for loads," he continued.

VTrans inspects all its bridges biannually until they are in poor condition and then they are inspected more frequently. The agency has a prioritization system for ranking projects which potentially includes all bridges in the state. The Moretown bridge is currently number 80 on that list meaning it is still a few years away from getting pulled into the more urgent project list.

Symonds provided the state's appraisal for the Moretown bridge as well as the bridge over the Mad River on Route 100 immediately south of American Flatbread which is slated for replacement in 2016. He provided a third report for the bridge over the Mill Brook just west of the intersection of Routes 100 and 17 which was subject to years of planning in the mid-1990s with no decision on rerouting that bridge ever reached.

The bridge on Route 100 just south of American Flatbread was built in 1938. Its deck condition is 4, or poor. The super structure is rated a 6 or satisfactory. Its deck geometry is "intolerable" as compared to federal standards and the report notes that there is a slight chance of the water overtopping the bridge and roadway.

The bridge on Route 17 over the Mill Brook west of the intersection of Routes 100 and 17 was built in 1939. It is rated a 6 or satisfactory for its deck, 5 or fair for its superstructure, and 8 or very good for its channel rating. In terms of meeting federal standards it meets or exceeds all standards except deck geometry where it is rated "intolerable, replacement needed." The report notes that there is a slight chance of the water overtopping the bridge and roadway.

Symonds cautioned that reading the bridge reports is not like comparing apples to apples because of different construction types.