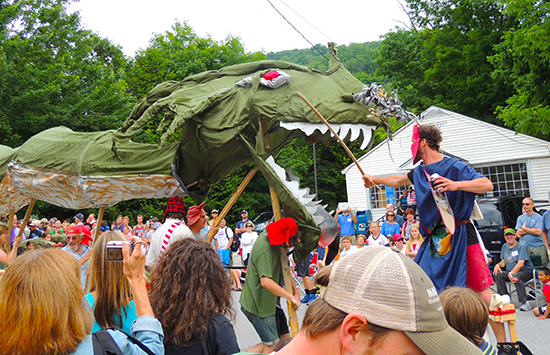 Valley residents took to the street in all forms of nationalistic—and decidedly unnationalistic—glory at the Warren Fourth of July parade last Friday. The theme this year was "Patriots, Act," which attendees interpreted in the form of bongo drums, presidential masks and giant paper-mache dragons.

This year, the award for Best in Show went to "Beware of Sleeping Giants," which was made by Prickly Mountain. The Warren Village People's float, "The Whistle Blowers," won Best on Theme and Most Patriotic went to Veterans for Peace.

Valley Democrats won the award for Most Political, but Most Enduring Politician went to Bill Doyle. Best Commercial went to "Patriots in Action," which was made by Sugarbush Resort and Mad River Glen Ski Area's float, "General Stark's Battalion of Drones," won the award for Best Promotional. The award for Funniest went to "The Eye of Providence" float. Best Bribe went to Mike Flanagan, who handed out dumplings.

"The Newlyweds" float won Best Newcomer and Most Experienced went to Becky Peatman. Last but not least, the award for Best One-Person went to Tim Seniff, Smallest went to Mrs. Vermont and, as always, Susan Klein won the award for Hardest Worker and thanks to everyone else who participated, volunteered in and cheered on the parade!