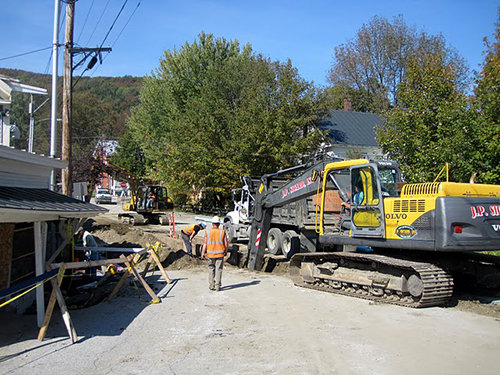 The extensive project long slated for the Waitsfield covered bridge and Bridge Street is likely to be pushed out further after the town opened the bids for the project and found them about $240,000 beyond budget.

The Waitsfield Select Board, at its August 11 meeting, discussed the bids and what options the town now has for getting any of the work done. Town administrator Valerie Capels told select board members that the town's attorney advised the board not to accept any of the bids as the town does not have permission from voters to spend an extra $240,000.

The project and the closure of Bridge Street have been the subject of intense discussion at Town Meeting this year and in 2013. At both Town Meetings there has been extensive debate about expanding the project to include putting the power underground on Bridge Street.

Voters have authorized the town to borrow up to $75,000 toward the project which includes $475,730 in repairs to the covered bridge and abutments plus $185,137 for work on Bridge Street itself, including repaving it and repairing the stormwater system and retaining wall on Bridge Street. The town received the first grants for the project in 2008.

Initially the project was to have been done in a four- to six-week period that would have involved closing the bridge and the street concurrently. Bridge Street merchants objected and asked the town to split the project into two phases, one to be done this fall and the other next spring. The town was willing, if it did not significantly increase the cost.

In response to questions from the select board this week, Capels said that, according to the engineer, it was not the project splitting that significantly increased the price. Rather, she said, the latitude for contractors to get the work done over the course of a year versus 12 weeks was a favorable contract condition for bidders.

At this week's meeting the board discussed whether it would be possible to break the project into its component parts and get bids for the covered bridge portion of the work and have it done this fall.

To put the project back out to bid either whole or in component parts would cost another $4,000 in engineering fees.

"I think it would be smart to talk to the engineers and see if it makes sense to put the bridge work out to bid, to get it done in October," said select board chair Paul Hartshorn.

"I agree. I think we should shoot for getting the bridge work done this year," board member Logan Cooke added.

"Are the components separable?" asked board member Sal Spinosa.

"Have we reached an agreement that we want to get something done this year?" Spinosa asked.

"I'm not sure we have time to get work done this fall. I will convey your feedback to the engineer. It can't happen this year unless it goes out to bid again and there is some expense related to that. In my judgment, given that we only had one bid for the Old County Road/West Village sidewalk project, I think the bidding climate is only going to get worse," Capels said.

"I think the priority is our covered bridge," board member Scott Kingsbury said.

"If we can get that piece in logically, we should do it," Spinosa said.

"There is some urgency here. Having the bridge work done next October is too late," Cooke concurred.

The board may hold a special meeting once Capels confers with the engineer Evan Detrick, on whether or not the bridge work can be broken out, bid out and undertaken this fall.