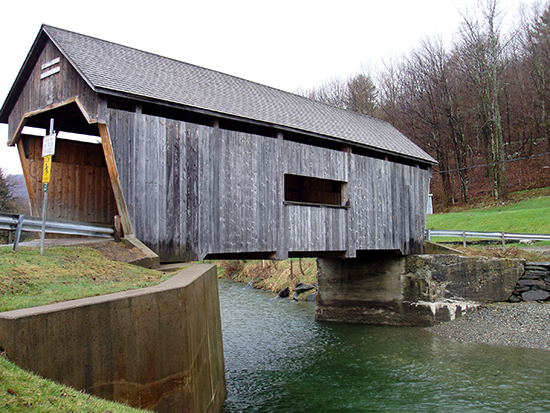 The town hired DuBois & King Construction to engineer an abutment redesign plan for the bridge last year, but due to the complex, ever-evolving science and state policies informing all work that's done in a river in Vermont, the plan is still not close to being finalized.

"We've spent a lot of money on the engineering and we have nothing to show for it," select board member Anson Montgomery said at the board's meeting on Tuesday, August 26, explaining that Warren has already invested about $45,000 in the redesign and is still not sure what the new bridge abutments will look like.

And, while DuBois & King has not finalized a plan, it does know the cost to repair the covered bridge will be much more than the town had anticipated, as the engineering company's original $375,000 price estimate has since increased to $620,000 (not including redesign fees).

Currently, Warren has a grant from the Vermont Agency of Transportation (AOT) for only $300,000 for the project and "if there isn't alternate funding, I don't really see [the abutment redesign] going forward—at least not at this time," select board chair Andy Cunningham said.

Warren public works director Barry Simpson said the project could be eligible for another transportation alternatives grant from the AOT, but, according to Montgomery, the town will still have trouble getting the go-ahead on the engineering from the state.

"The parameters are so wide open," Montgomery said, including the fact that the town does not know what will be happening with the timber crib dam that lies just downstream of the bridge, which has fallen into disrepair and which the select board would like to remove from the river.

"Until we get everyone on the same page, why go any further?" Cunningham asked.

"You don't turn on an engineer until you know the scope [of the work]," select board member Bob Ackland said.

At the end of their discussion last Tuesday, the board agreed to tell DuBois & King and the state that the town was losing interest in the project due to budgetary concerns. The board will discuss the future of the timber crib dam with representatives from the Warren Village Dam Preservation Trust and Friends of the Mad River at their next meeting on Tuesday, September 9, at 7 p.m. at Warren Municipal Building.