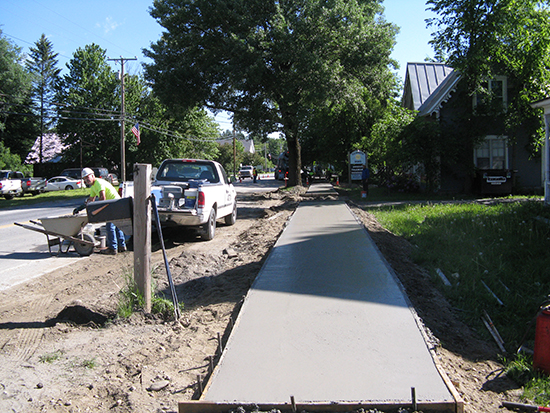 On Saturday, August 16, 420 people walked the section of concrete in front of Joslin Memorial Library in Waitsfield.

This summer, Central Vermont Regional Planning Commission (CVRPC) installed pedestrian counters in three locations throughout The Valley. In addition to the pedestrian counter on the sidewalk in front of the library, the planning commission also installed one on the sidewalk in front of General Wait House and one at the entrance to the trails at Blueberry Lake in Warren.

The pedestrian counter in front of the library, which collected data from August 6 to 26, found that an average of 180 people a day used the sidewalk on the corner of Bridge Street and Route 100. On days when the counter recorded above-average foot traffic, "It's sort of neat to see what events and things were happening," Mad River Valley Planning District director Joshua Schwartz said.

For instance, on Saturday, August 16, when 420 people passed in front of the library, the Vermont Festival of the Arts was hosting its annual Plein Air Paint-Out in Waitsfield Village. And when 325 people used that same section of sidewalk on Wednesday, August 20, locals were gathering at the Round Up on the River behind The Sweet Spot.

According to Mad River Valley Chamber of Commerce director Susan Klein, more foot traffic means more sales for local businesses and the numbers reflect that. Klein talked to the owners of Artisans' Gallery in Waitsfield after the Plein Air Paint-Out and found that the day had been their busiest one to date. "They indicated that their sales were double that of a typical holiday," Klein said, "and I would suspect that other [businesses] have had a similar experience."

With the new sidewalk along the east side of Route 100 from Bridge Street to Waitsfield Elementary School, "people are more apt to park their cars and walk," Klein said, "and there are a lot of stores along the way."

The new sidewalks also provide a safer route to school for some students. The pedestrian counter in front of General Wait House recorded an average of 51 people a day passing in front of the tourist info center from May 21 to July 27," and that's pretty much traffic to the school," Schwartz said, noting that the number of pedestrians peaked on weekday mornings and afternoons.

Lots of people are also using the multi-use trails at Blueberry Lake in Warren, where the pedestrian counter recorded an average of 86 people a day from June 15 to July 25. During that time, the busiest day of the week was Sunday, but the busiest day on record was Tuesday, June 26, when 277 people explored the trails—including dozens of local elementary school children on mountain bikes as part of the Mad River Rippers program.

As The Valley continues to invest in infrastructure to support alternative modes of transportation and recreation, it will continue to monitor how its investment is being utilized. Around town, it seems like people are using the sidewalks and trails, but "it's great to have the data to support the anecdotal evidence," Schwartz said.