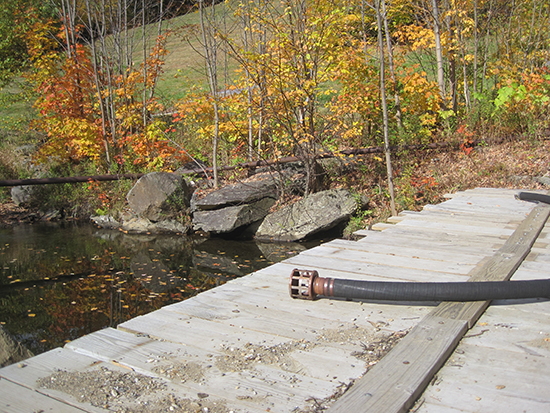 As the days grow colder, gardeners are pickling the last of their harvest and homeowners are starting to fire up the woodstove. But Mad River Glen employees have been thinking about winter all summer long.

Last Sunday, October 12, the ski area's shareholders met to discuss the upcoming season, which will likely look very similar to the last. For the past few months, the Mad River Glen crew has been hand-mowing trails, picking up rocks, improving drainage and other "not-sexy maintenance stuff," marketing director Eric Friedman said. Unlike larger resorts that invest hundreds of thousands of dollars each year in new, high-tech snowmaking and grooming equipment, at the ski-it-if-you-can mountain "we're working hard to keep what works," Friedman said.

As it stands, Mad River Glen "is basically the only ski area with all-natural snow left in New England," Friedman said, explaining that the mountain makes white stuff on only 15 percent of its trails, in high traffic spots surrounding the base area.

According to Friedman, natural snow "is generally a better skiing surface" than man-made snow, "but there are generations of skiers who have grown up not knowing the difference" between the two, he explained. They don't understand that with natural snow, "you can't groom it every night," he said.

Instead of heading out in Sno-Cats at the end of every day during the winter, Mad River Glen does everything it can in the off-season to make sure the mountain is skiable even with minimal amounts of snow. Most who hike up General Stark in the summer are surprised by how "lush" the area is, Friedman said, explaining that they've been grassing over areas and that where there is rock, it's part of a ledge that is flush with the trail.

Since its opening in 1948, Mad River Glen has looked into increasing its snowmaking but there's just not enough water, Friedman explained. Currently, the mountain makes snow from runoff from the Mill Brook, but due to stream flow limitations imposed by the state it can only take so much water at a time, and the ski area has little to no space to store it for use during low-flow months.

Instead of a snowmaking pond, Mad River Glen has a "snowmaking puddle," Friedman said. But even if water weren't an issue, the mountain would still be limited by its uphill capacity—it's two main lifts aren't quads but a double and a single chair—and by its small parking lot.

"This base area is so confined," Friedman said. "We have to manage it really well," he said, but despite—or perhaps because of—the ski area's limitations, "everything just sort of works," he said. Whether it's intentional or not, the operational philosophy behind Mad River Glen is very much "by design," Friedman said.

Because Mad River Glen hasn't updated some of its snowmaking and grooming equipment in many years, the mountain is more like a museum, Friedman joked. Currently, Mad River Glen is the only ski area that appears on the National Register of Historic Places. "We're like the Sturbridge Village of ski areas," Friedman said, but still "we're on the bucket list for a lot of people."

As Mad River Glen, like most northeastern ski areas, faces challenges imposed by increasing fluctuations in temperature and precipitation from climate change, the mountain will have to adjust something eventually, Friedman said, but it probably won't be snowmaking or grooming.

This past winter, the ski area contracted with Sno.matic Controls and Engineering to give a presentation to its co-op members on what increased snowmaking would require, both financially and physically, "because they're the ones making the decisions," Friedman said. "And they get it," he said, explaining that most shareholders understand and accept Mad River Glen's limitations.

In the years to come, "I think it's going to be really interesting for the co-op and the community to figure out where we go from here," Friedman said, but in the meantime the mountain is doing well. Despite less-than-stellar winters the past two years, season pass sales haven't suffered, Friedman said. "We were expecting a dip but we didn't have one," he said.

And while those without season passes will often wait for a powder day to hit up Mad River Glen, some of the best skiing can be found still days after a snowstorm, Friedman said, encouraging those who haven't to check out the ski-it-if-you-can mountain on their own time and discover what makes it different.