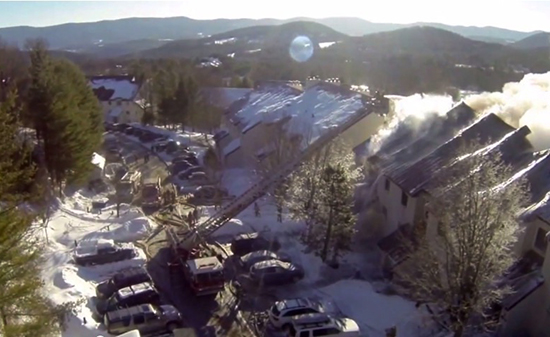 The District 5 Environmental Commission is reviewing the latest submission from Mountainside Condominium Association to determine whether the commission has enough information to deliberate and write a decision or whether more information is needed.

The condo association began Act 250 hearings in October to rebuild the 36 units that were destroyed by fire last February. The condominium complex was 100 percent full for the holiday week, including owners and renters plus pets. Everyone (and their pets) escaped without injury. Mountainside had 90 residential and seven commercial condominium units in three separate buildings. The building that burned is the closest building to Sugarbush's Out to Lunch trail. The association hopes to have the units ready for occupancy for the 2015-2016 ski season.

The association's application was submitted in August with the rest of the supporting documentation submitted in September. In November the commission issued a recess order seeking more information and attorneys for Mountainside Condominium Association responded on December 9.

Clancy DeSmet, District 5 Environmental Commission coordinator, said the commission will determine whether to close the record or whether there might be outstanding questions.

The information the commission sought in the recess order includes mundane details such as the size of the parking spaces to larger matters such as whether the project is far enough from Rice Brook. When the condominiums were originally built in the 1979 the state's stream setback guidelines were less stringent than they are today.

The commission also asked about the conservation flow status of Sugarbush's mountain water system relative to the use of Clay Brook.

"The applicant does not have knowledge regarding the status of the Mountain Water Company system or its use of Clay Brook because the applicant neither owns nor operates that system. This request is not germane to the project because the project is not located within the Clay Brook watershed and does not involve any change to the Mountain Water Company system," responded Carl Lisman, attorney for Mountainside.

He goes on to note that the Agency of Natural Resources, in September, issued a water supply and wastewater disposal permit for the rebuilt condos which allows the condos to use the Mountain Water Company system which had supplied the water to the condos before the fire.

One issue that the commission, as well as several state agencies, has spent a lot of time on is the issue of the setback from Rice Brook. The condominium association provided detailed responses explaining how in the rebuild the riparian buffer will be improved. Further, the association pointed out and personnel at several other state agencies concurred, rebuilding the condominium building in its former footprint will not increase the impact on Rice Brook.

The condo association pointed out that the 36 units must occupy the same footprint as the original building, noting that there are constraints caused by the surrounding steep slopes, the parking requirements, the building height limitations, access for emergency vehicles and compatibility with the adjacent condominium buildings.

The riparian management report notes that the plan causes no new encroachment on the riparian buffer.

A letter to the District 5 Commission from Sacha Pealer, watershed management division of the Department of Environmental Conservation, reports that "because the pre-fire development already had significant encroachment on Rice Brook, and the proposal essentially duplicates that high level of encroachment, the proposal will not increase fluvial erosion hazards and, therefore, meets the 2009 Technical Guidance for Determining Floodway Limits."

Jen Mojo, regulatory planning analyst for the Agency of Natural Resources office of planning and legal affairs, references the 2009 Technical Guidance for Determining Floodway Limits standards in her comments to the commission about the question of the setback from Rice Brook.

"The 2009 Technical Guidance does provide the relaxed standard for redevelopment in the river corridor protection area ... so long as there is not an increase in the level of encroachment into the stream. Putting a replacement structure in the same location as a pre-existing structure would not lead to additional channelization of the stream and thus would not increase the hazard over and above what previously existed. The intent of the relaxed standard is to allow a pre-existing use," Mojo wrote.