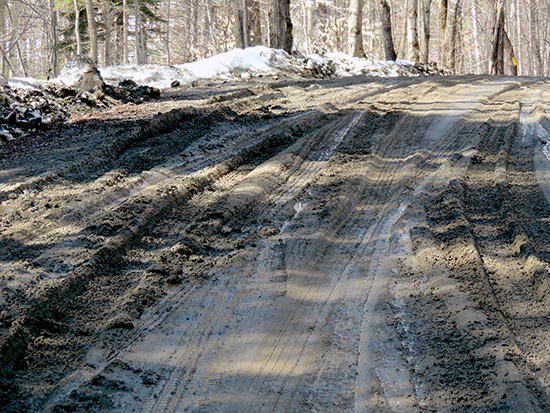 Across The Valley, dirt roads thawed and then refroze this past week, but drivers are still anticipating the day when temperatures rise more steadily and mud season kicks into full gear.

Sometimes, when a road becomes so soft and rutted that it is impassable, a town will close it to nonresidential traffic. During that time, only emergency and essential vehicles such as feed delivery trucks are allowed through, although nonessential trucks weighing over 15,000 pounds can obtain an excess weight permit and pay a fee to travel.

When that happens, the nonessential trucks will call ahead to the town before driving on the closed road, and "We usually ask them to do it first thing in the morning, before the road starts breaking up," Warren Public Works director Barry Simpson said.

Meanwhile, road crews across The Valley work hard to ensure that even the most rutted roads are still passable for emergency vehicles.

According to Mad River Valley Ambulance Service (MRVAS) rescue officer Kevin Van Schaick, MRVAS has two ambulances with four-wheel drive, "which sort of clears the problem in most cases," he said. As with driving any car that time of year, "Usually the trick is to pick the right groove," he said.

"The rig has always made it, to my knowledge," Van Schaick said of the MRVAS ambulance, but sometimes first responders have trouble making it to a call with their private cars.

For the Warren Volunteer Fire Department, muddy roads aren't too much of an issue because they keep the winter tire chains on the trucks into spring, fire chief Pete DeFreest said. "We get stuck in the winter more than we do in the spring," he said. "I don't think we've ever had a truck stuck in the mud, but I suppose there's always a first."

Both emergency responders agree that the towns usually succeed in keeping roads drivable during the spring. "The road crew generally does a really good job," DeFreest said. Simpson explained that crews usually go out grading at midnight and 1 a.m. in order to smooth out the roads before they refreeze.

As temperatures continue to rise, dirt road residents can help towns by trying to limit their driving during mud season to one trip out per day if possible.