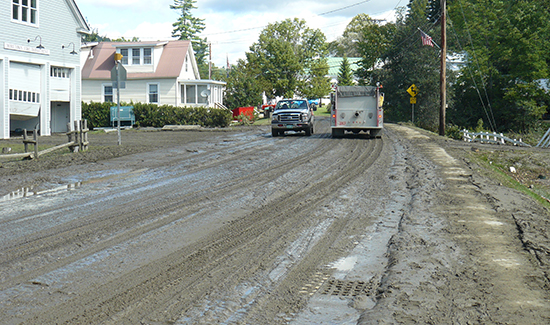 Plans for the construction of the new Moretown Village sidewalk encountered a setback last month when local project manager Pat Travers learned that 675 feet of the roughly 900-foot concrete path was located in the flood plain.

"We received design proposals from four different engineers and none of them brought up the possibility that the project was in the flood plain," Travers told the Moretown Select Board at their meeting on Monday, April 6.

But after Tropical Storm Irene in August of 2011, "This whole town was under water," select board chair Tom Martin said. "You would have thought ..."

The new Moretown Village sidewalk will run along the east side of Route 100B from Moretown Mountain Road to the northern end of Hurdle Road. The conceptual design for the project includes an 11-foot travel lane for cars bordered by a paint stripe, another 4 feet of asphalt, a 7-inch granite curb and a 5-foot concrete sidewalk.

Before learning that most of the sidewalk was located in the flood plain, the board and adjacent property owners had reviewed the conceptual design at two public hearings. Now, the discovery is causing a delay, Travers said, as Doug Henson of Lamoureux & Dickinson Engineering will need new permits for the project.

Since learning that the sidewalk was located in the flood plain, Henson has done a walkthrough of the site with a representative from the Vermont Department of Environmental Conservation (DEC), who, once she receives a letter from the town's zoning administrator, "has indicated that she's going to approve the project," Travers said.

In addition to new permits, because the sidewalk is located in a flood plain the town will have to submit a hydraulic report for Doctor's Brook Bridge on Route 100B—which the sidewalk will parallel, on a separate bridge—to the Vermont Agency of Transportation (VTrans).

"We know that's not going to pass," town administrator Cheryl Brown said of the hydraulic report, explaining that Doctor's Brook Bridge is currently on the town's replacement list, albeit not for the short-term. But Travers does not expect the report will impact the project's approval.

"I don't think it's going to be that big a deal," Travers said of the added step, although VTrans did request that the bridge for the portion of the sidewalk that crosses over Doctor's Brook be removable, he explained, so that it can be easily taken out when the town does construction to replace the Route 100B bridge.

In early 2014, Moretown applied for and received a $375,000 grant from the Vermont Agency of Transportation Bicycle and Pedestrian Program to construct the sidewalk, for which the town is responsible for a 10 percent match. Last June, it hired Travers to serve as local project manager and last November it accepted a bid from Lamoureux & Dickinson for $38,500 to do the engineering.

Moving forward, the Moretown Select Board will hold another public hearing before it finalizes the design plans for the new sidewalk.