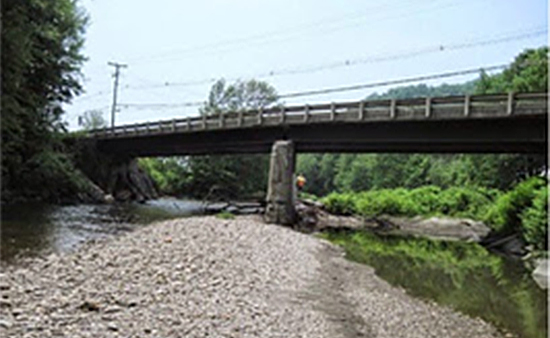 In July of 2016, the bridge on Route 100 in front of Lareau Farm in Waitsfield will be reconstructed with the Vermont Agency of Transportation’s (VTrans) Accelerated Bridge Program (ABP).

During Tropical Storm Irene in August of 2011, accelerated construction methods were used out of necessity and from that experience VTrans learned to build faster and minimize project impacts without compromising quality. The Accelerated Bridge Program (ABP) was implemented in 2012 to improve the condition of Vermont’s waterway crossings while reducing project costs through expedited project development, delivery and construction.

The ABP uses innovative techniques and short-term road closures to rehabilitate or replace deteriorated bridges and culverts across Vermont in mere weeks, compared to projects that would take an entire construction season using conventional techniques. For the Lareau bridge, the biggest difference in reconstructing it with the ABP is that the crews will not install a temporary bridge like they did two summers ago with the Kingsbury iron bridge in Warren. Instead, Route 100 will be closed for several weeks starting next July.

As part of the Lareau bridge reconstruction project, crews will make a bench cut in the northern riverbank in order to facilitate the creation of an underpass on which pedestrians and bicycles can cross Route 100 from Lareau Swimming Hole to Lareau Farm. The underpass will, someday, create a direct and safe connection between the Austin Walk and the Revolution Trail at American Flatbread.

Since its implementation, VTrans' ABP has reduced the percentage of structurally deficient bridges throughout the state from 16 percent to 7 percent since 2009. During the 2014 construction season, accelerated bridge construction and prefabricated bridge components were used to replace five bridges in the same region in record time in Warren, Rochester and East Middlebury.