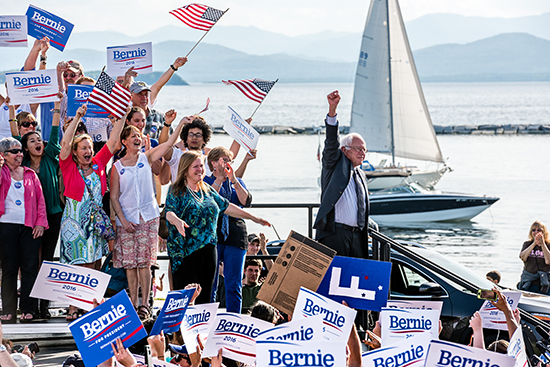 On Tuesday, May 26, Bernie Sanders kicked off his presidential campaign in Burlington calling for a political revolution.

"This country faces more serious problems today than at any time since the Great Depression," Sanders said, citing wealth inequality and the collapse of the middle class. In running for president, "We're going to build a movement of millions of Americans who are prepared to stand up and fight back," Sanders said of himself and his supporters.

In addition to calling out billionaires and calling for an end to corporate greed in his fed-up signature style, Sanders outlined an agenda that called for a federal jobs program, higher minimum wage, tax system reform, campaign finance reform, a carbon tax, single-payer health care, free public college tuition and an international coalition against the Islamic State.

But how is he going to accomplish all that?

As proof of one of his former political victories, Sanders chose to hold his presidential campaign launch at Waterfront Park: a popular public space that might not have existed if it weren't for his efforts as mayor of Burlington in the 1980s.

Last Tuesday, over 5,000 people, including many from The Valley, gathered on the grassy lawn beside Lake Champlain, backed by the hazy peaks of the Adirondack Mountains. "This is a very emotional day for me," Sanders said, explaining that he was excited not only about the announcement he was making but also the place in which he was making it, reminding people of his fight against developers who, back in the 1980s, wanted to build condominiums on the lakeside property.

"As mayor, I worked with the people of Burlington to help turn this waterfront into the beautiful people-oriented public space it is today," Sanders said. "To those who say we cannot restore the dream, I say just look where we are standing."

Vermont is small, but it "has led the nation in so many ways," Sanders said, and now, "I am proud to announce my candidacy for president of the United States of America."