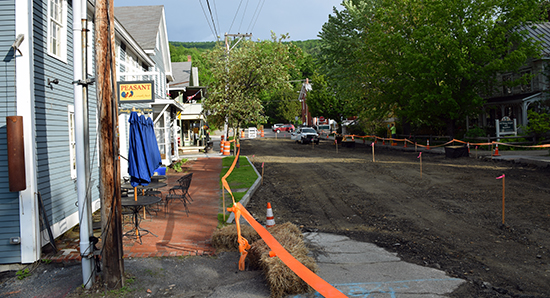 With razor-thin construction timelines, a group of Waitsfield residents is working with the Waitsfield Select Board to see if the sidewalks on Bridge Street can be enhanced with brick borders and to see if there is a way to install streetlights as part of the project.

In addition to a very tight construction timeline, aimed at getting the street and the bridge opened by mid-September, the town is working with a budget for the project that has no margins for cost overruns.

This is the second week of an almost four-month construction project to fix the stormwater system on Bridge Street, repave that street, fix an abutment on the covered bridge and replace the pedestrian bridge that is attached to the bridge. Because the project involves working in the river, the state has also imposed strict timelines for when that work can be done.

But there is enthusiasm by residents and willingness by the town to consider how it might be possible to upgrade those two portions without increasing the cost. Residents are organizing a fundraiser for people to buy bricks for the sidewalk and are also organizing for people to contribute to the purchase of the streetlights. The project budget includes laying the conduit for the streetlights but not installing bases or the actual lights.

AnneMarie DeFreest and Barbra Gulisano brought the idea to the Waitsfield Select Board at its May 18 meeting, bringing along photos of other similar streetscapes in Vermont. They asked the board specifically how much money was budgeted for the sidewalk and if there was a design plan they could view.

DeFreest said that after visiting the other towns, they were very impressed by what Vergennes had done, which was to create a brick border for its concrete sidewalk. Such a plan, she said, allows the town's snow removal equipment to plow the concrete but not the bricks.

"The bricks are laid dry and have held up well without frost heaving. Vergennes also did a great job with planting and benches as well as streetlights. That's why we want to see the design plan that is in place for Bridge Street and I'd like to know the costs for installing the conduit," DeFreest said.

"Barbra (Gulisano) and I were talking about the streetlights as well as the brick work and whether there'd be any board opposition to us doing a fundraising campaign to upgrade the work. This town has a lot of pride and we'd take the lead on the efforts," DeFreest continued.

She asked specifically when it would be too late for a change order regarding the sidewalk and whether the town would allow a citizen to work with the contractor on the aesthetics of the sidewalk and streetlights.

Select board members had some initial reservations about having a citizen committee be the liaison with the contractor.

Town administrator Valerie Capels said that Kingsbury Construction, the subcontractor for the sidewalk work, would do whatever work the town wants done.

"Although the design plans aren't clear, we expected that the streetlights would be stubbed at ground level and they recommended that if we knew what kind of lamp we were using, that we install the bases now," Capels explained.

"Whose decision it is to pick out the lamps?" DeFreest asked.

"That's part of tonight's meeting and a project meeting next week. In terms of timing, after the Mad Marathon, they'll turn to the sidewalk," Capels said.

"Our interest is that some of these things are still a moving target and if we knew the budget and how much of it was going for all concrete sidewalks, we could determine if we can incorporate a brick accent and streetlights. Is the proper place to work with you going forward at the design meetings?" DeFreest continued.

"Everything that you're asking for is going to cost more," board member Scott Kingsbury said.

"Without knowing the costs that are currently in the plan, there's no way for us to contact other people and find out if there's support for upgrading the plan," DeFreest said.

Board member Kari Dolan said it was a great idea for a fundraiser and noted that the Tweed River Music Festival organizers (who were before the select board earlier that evening) were looking for a local organization to donate to.

"More power to whoever wants to put the time in to make this better. There are a lot of targets that have to get hit perfectly for this to work. It's not just having the money; it's having it in time. If you're going to do this, check your hard stop points," board member Logan Cooke said.

Gulisano is currently planning a fundraiser to say goodbye to the old sidewalk and hello to the new sidewalk. She and DeFreest are working on a plan where people can buy bricks before July 12 (the day of the marathon) as well as researching the cost of bricks, whether used bricks can be had for free, the costs of various styles of streetlights and other details.