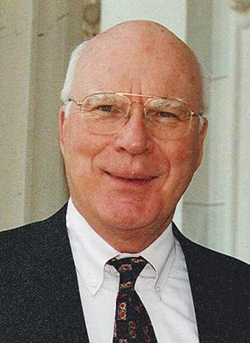 A six-term U.S. Senator, with a camera almost always affixed to his shoulder, Vermont Senator Patrick Leahy has a unique vantage point on world events. At more than 6 feet tall, he also has an exceptional opportunity to shoot dramatic angles over the heads and shoulders of the cast of characters on the political stage. Many of his photographs capture world leaders at significant moments. The difference between his photos and those of a photojournalist is a matter of perspective.

No commercial photographer will stand behind a president of the United States, preserving for all time the act of signing the document and the signature itself.

Leahy's bird's-eye view of history has produced many accomplished and interesting images. His photographs of a Tibetan father and his son document the richness and complexity of lives lived out of the spotlight. Patrick Leahy captures moments in his subjects lives, both joyful and difficult, with his eye and his heart.

See a selection of his photographs at Big Picture Theater in Waitsfield for the month of July. Admission is free.