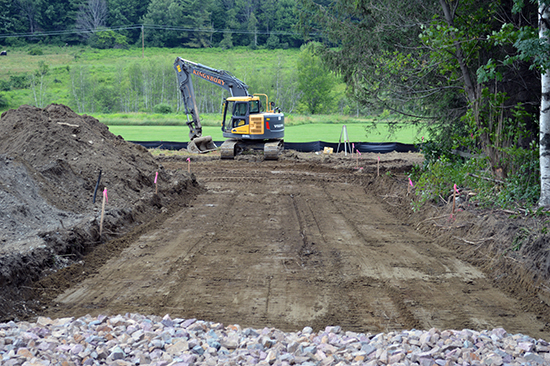 After five years of wrangling, two votes and several petitions, Waitsfield broke ground on its new town office with no fanfare, no golden shovels and only an excavator on July 9.

The town is building a new town office on a lot known as the Farm Stand parcel at the north end of the village. Last week, contractors disassembled the farm stand and began excavation for the project. The project could be completed as early as December. Waitsfield awarded the contract to Millbrook Building and Remodeling last month.

The low-bid construction cost of the new building is $1,275,000, but if the other costs associated with it are added in, including a generator, materials testing, water connection fee, clerk of the works, contingency and grant administration, plus design, engineering and permitting, the costs come to $1,564,981. That does not include the $100,000 donation that the town received for the Farm Stand property.

The building will be 4,475 square feet, which is more than originally planned, but the Town Office Design Committee decided to finish the second floor of the building now versus later. The design committee reduced the first-floor square footage when adding a completed second floor.

SHOVEL IN THE GROUND

Putting a shovel in the ground on the project marks the end of a long five-year odyssey that polarized the town at times. Waitsfield's town office, currently in the basement of the Joslin Library, is in the flood plain and in 2010 the town created a task force to look for where a new town office might be built or located within the town. The committee looked at and rejected sites in Irasville and looked at several existing and empty buildings in the town, rejecting those as well. The committee settled on the Farm Stand parcel as more desirable and began working with architects on draft plans.

A group of town residents did not like the idea of building new and began to ask the town to consider rehabilitating the former Methodist Church in the village for a town office instead. This led to several rounds of estimates detailing which project would be more expensive.

In March 2013, voters rejected a motion to bond for up to $1.6 million to build a town office on the Farm Stand site. That spring the town received a $750,000 Community Development Block Grant toward the project and also received word that it would receive a $100,000 donation for the Farm Stand parcel. Voters petitioned to revote and voters petitioned for a Farm Stand versus Methodist Church vote.

In July 2013, voters approved spending up to $650,000 to build a new town office at the Farm Stand site and the Town Office Design Committee went to work. This spring after the news that the former People's United Bank building would be vacated in July and be put on the market, residents petitioned the select board to stop any efforts to build a new office and consider the centrally located bank, which already has a vault.

After well-attended public hearings and a lot of public input, the select board rejected that option and continued with plans to build on the Farm Stand site but not before the bids came in and all were over budget. Waitsfield applied for an additional $230,000 in grant funding but only received $123,000 in additional grant funding. {jcomments on}