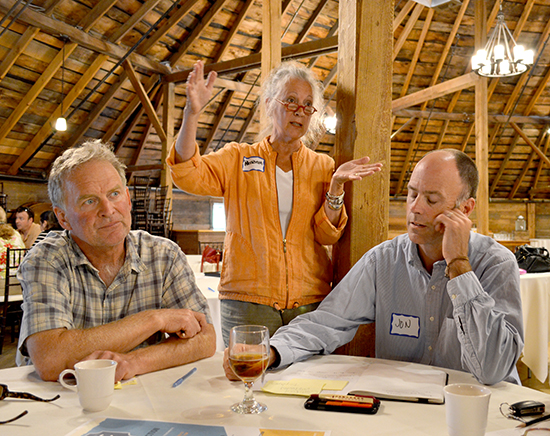 When it comes to professional services, The Valley has “good infrastructure for a rural town,” one business owner said at the Economic Vitality workshop that took place at The Inn at Round Barn Farm on Thursday, August 13.

“We’re like the little Silicon Valley of Vermont,” another workshop attendee said, speaking to the relative size of the local sector. But still, there are challenges to working in professional services in The Valley.

Last week’s Economic Vitality workshop was the fourth in a series of nine that will take place this summer. The series is presented by the Mad River Valley Planning District (MRVPD) and the Mad River Valley Chamber of Commerce following an economic study of the region that was completed in 2014.

According to MRVPD executive director Joshua Schwartz, the workshops are a way of “not just working on the recommendations of the study,” he said, “but working with the community and business owners to figure out the best path forward.

The professional services sector accounts for about 10 percent of employment in The Valley and consists of legal, accounting, architectural, engineering, computer systems and advertising services, Schwartz said last Thursday. “Specifically with this sector there appears to be a lot of smaller businesses,” he said, and a large number of them work from out of their homes.

Perhaps because of that, when thinking about the challenges facing the professional services sector in The Valley, a lot of them had to do with a lack of infrastructure and last Thursday business owners strategized solutions to improving commercial areas, creating more affordable housing and increasing networking opportunities.

There are a lot of empty storefronts in Waitsfield, and so “there’s a perception that it’s hard to run a business here,” another workshop attendee said, which “can foster a lack of confidence in businesses looking to come here.”

“Irasville needs a vision,” one business owner said last Thursday, referring to Waitsfield’s commercial center. In order to work, that vision “would have to include a buy-in from all of the towns” whose residents rely on the commercial area, but with additions like putting a roof on Skatium to create a large indoor event space, “what’s there now could easily be made ... into something that’s spectacular,” he said.

In addition to solving The Valley’s decentralization issue by improving its downtown, business owners expressed the need for more affordable housing in The Valley.

“People can’t really afford to live here,” one workshop attendee said, which makes it hard to find qualified employees “who will stay longer than one ski season,” he said.

There are some low-income apartments in The Valley, but they’re underutilized, one business owner said. “We’ve built it, but we can’t get people to live in it,” he said.

And so last Thursday workshop attendees came up with the idea of setting aside land for a community of tiny houses. “Millennials would love it,” one business owner said, referring to the trend toward smaller, more eco-friendly living arrangements.

In order to have a community of tiny houses, local zoning laws would have to be amended, but it would be an “experiment,” one workshop attendee said, and could serve as a “stepping stone” to something bigger.

As for increasing network opportunities, one business owner spoke to the need for online organizing, “instead of just being storefront oriented,” she said. Some ideas for more communication among companies and employees included the creation of a newcomers club and incubator offices – “like a shared maker space but for professionals,” she said.

Despite its challenges, one of the strengths of the professional services sector in The Valley is its “intimacy,” one business owner said.

“The Valley breeds integrity,” another workshop attendee agreed, explaining that because the community is small and close knit, “if someone isn’t a good professional it gets known pretty quickly,” he said. “We self-clean.”

As she collected the ideas that workshop attendees wrote down on sticky notes, Floyd spoke to the importance of residents’ input, which will be incorporated into a final presentation to the community this fall. “We’re actually creating some history and doing something, which is really exciting,” she said.