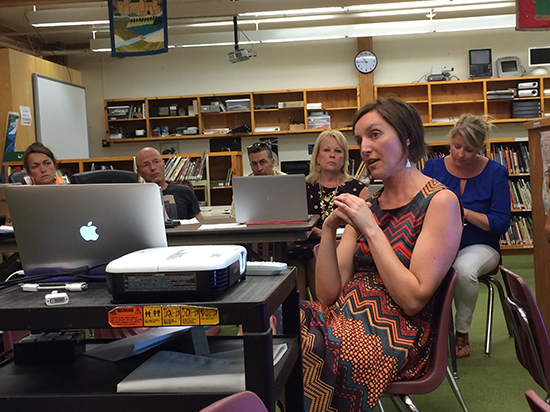 “It’s not unique having situations in Vermont where boards are sort of caught in a difficult place,” Nicole Mace of the Vermont School Board Association told residents at the Warren School Board meeting on Tuesday, August 18.

Mace attended the meeting to give a PowerPoint presentation about the role of school boards and supervisory unions in response to recent conflict that arose in the community after the Warren School Board decided not to renew the contract of administrative assistant Laurie Jones, who had worked behind the front desk for 27 years. (See related story about Jones’ new job on Page 7.)

In the weeks after they learned of Jones’ dismissal, many residents voiced their disapproval of the board’s decision and their distrust of the leadership of the school and the Washington West Supervisory Union (WWSU).

“A theme I’ve noticed from a couple of meetings I’ve watched online is people saying, ‘Well, we’ve done it this way for 30 years,’” Mace said last Wednesday about the Warren School community’s questions regarding the recent changes. “But a lot has happened in education in 30 years,” she said.

Right now, “The layers of federal and state expectations [for schools] have created more of a role for the supervisory unions than ever was needed,” Mace said, explaining that that was done in part “to remove that responsibility from principals,” whose job is to serve as the “educational leader for the school,” she said.

“What we know about how students learn and instructional methods has evolved significantly over the past 10 to 15 years,” Mace said, and it’s the principal’s job to make sure teachers continue to undergo professional development.

As for the school board, according to Mace, it’s “really here to say, ‘OK, here are the things that are important to our community and here’s the box you have to work in,’” she said. They engage the community, create a vision for the school, employ a superintendent, establish policy parameters, adopt a budget and monitor progress.

Because of the supervisory union’s role in hiring and addressing complaints about staff, “There is not that direct line of accountability between a board and an employee,” Mace said, which can be “confounding” for members of the community.

That being said, “Having a level of displacement between the board and employee issues is really important,” Mace said, because employees are entitled to due process.

“Because our system is as complex as it is,” Mace said, “it really comes down to communication and trust.” It’s important that school boards think about “their strategies for engaging with the community,” she said.

When residents asked how they can have a voice, Mace gave an example of a committee that parents, the principal and a representative from the school board member formed in her hometown of Winooski. When it comes to community involvement, she said, it’s not always appropriate to take matters directly to the board, “but none of this is to say there’s no role for parents,” Mace said, explaining that it’s about finding the “best vehicle” for them to share their hopes and concerns.

With the arrival of new expectations for schools from the state and federal government, “I acknowledge that there is a lot of change happening and that it’s very disruptive,” Mace said. “I certainly don’t think a PowerPoint presentation is going to fix that, but I’m hoping it provides a little bit of context.”