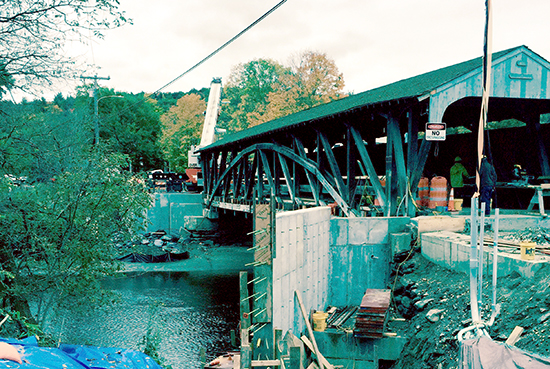 After receiving estimates to reroof the covered bridge that range from $8,775 to $74,904, the Waitsfield Select Board decided to postpone any roof work on the bridge until next spring.

As part of the extensive Bridge Street and covered bridge project that has been under way since May and which has involved closing the bridge and the street, the contractor, Alpine Construction, was to install a shingle roof on the new pedestrian bridge for $14,575.

Last month, the organizers of the Bricks for Bridge Street beautification project asked the select board to consider repairing the roof of the covered bridge and exploring whether the entire roof could be reshingled or possibly reroofed in metal.

The board sought quotes for the project and reviewed them at this week’s September 28 select board meeting. The low bid, a metal roof for $8,775, did not include stripping off the old shingles and staging for the installation of a new roof, which could cost between $28,000 and $30,000 based on the other bids.

Given estimates, the board opted to instruct Alpine Construction to cover the pedestrian walkway with ice and water shield and put off the roofing project until the spring. Town administrator Valerie Capels told the board that the town can apply for a grant to help with the costs of reroofing the covered bridge.

At this week’s meeting, project engineer Chris Kaufman was present to discuss the project timing and cost overruns with the select board. The original Alpine Construction bid was $919,554. There were additional costs associated with change orders as well as costs associated with additional work caused by ledge and grade issues and the need to shore up the abutment’s wing walls. The revised Alpine Construction cost estimate is $1,024,624 and Kaufman put that revised cost estimate at $998,672.

Asked to explain some of the drivers of the cost overruns, Kaufman detailed the removal of an underground pipe on Bridge Street that was not originally to be removed. The real issue, he said, was the abutments.

“Once we dug around in there and realized we could not build them as anticipated because of the ledge, it required an extension of wing wall,” he said.

Capels will be applying for a grant to cover the additional costs and said she is fairly confident the town will receive additional funds.

Kaufman provided the select board with an update on the schedule for completing the project – which was to have happened by the middle of this month. There are issues with the timing due to the grading around the abutments.

“Why are there issues with the elevations? Didn’t the original engineers shoot elevations as their first job?” asked board member Kari Dolan.

“I don’t know what the first engineers, Dubois and King, did,” Kaufman said.

“That’s a good question for Dubois and King,” Dolan responded.

The final concrete pour for the abutments is scheduled to take place October 22 and then it has to cure for five to seven days before it can be backfilled. The entire process remains very weather dependent, Kaufman said.

The pedestrian walkway is to be installed today, October 1 (and spectators may enjoy the sight of the walkway being installed in two pieces via crane), but is also weather dependent as the utility lines must be moved to accommodate the installation.

“The bridge work will get done by late October or early November, but you may not be able to pave this year. To get everything to drain correctly, you have to pave up to David Sellers’ property. The rest would have to be hardpack,” Kaufman explained.

“Alpine Construction says the bridge will stay closed until the project is done. They are fine with opening the street if the paving gets up to Sellers’. Our window is really tight. We need to prepare for that potential,” he added.

The board also heard from Barbra Gulisano, one of the organizers of the Bridge Street beautification work. Gulisano’s group raised funds to purchase and install decorative, engraved bricks as well as plain bricks to accent the sidewalks on both sides of the street, as well as funds to purchase and install streetlights and benches. Gulisano told the board that right now they are purchasing bricks to replace some of the engraved bricks which broke during transit and are selling a limited number of additional bricks to round out that order.

She and her fellow organizers AnneMarie DeFreest and Marta Marble will be reopening their larger fundraising campaign to run through the fall and winter so that they can create engraved and plain brick accents on the small deck-like areas that the abutments and wing walls created.

They hope to install one to two streetlights that match those on Bridge Street on the far side of the covered bridge and want to install one swing on each deck area, similar to those on the Burlington waterfront.

They are also working with the town on making sure all the railings on Bridge Street are the same.