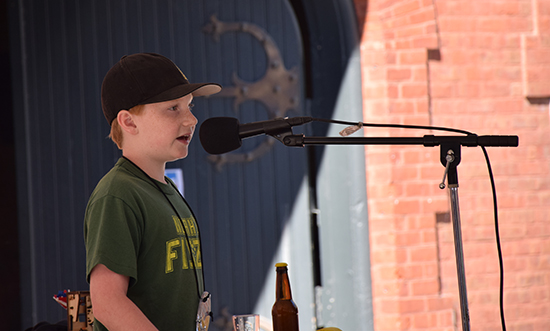 Schwartz, who ran a booth at the faire teaching kids to launch rockets, took three minutes to pitch his business, Noah’s Fizzy Maple Lemonade, to a panel of entrepreneurs, investors and advisers. Of the six people who made pitches, Schwartz won the Riders’ Choice Award, taking home $500 and a Vermont Teddy Bear biker bear.

“I wanted to make lemonade different,” Schwartz said of the idea behind Noah’s Fizzy and so he started putting the citrusy summer drink in beer kegs. For the past few years, Schwartz has been selling his carbonated, maple-sweetened lemonade at local festivals and fairs.

“This year, I sold out of 15 gallons at the Vermont Music Fest,” Schwartz told the panel last Saturday and the crowd clapped and cheered. On top of that, “I sold out of 25 gallons at the Warren Fourth of July parade,” Schwartz said—more clapping and cheers—and this year he also sold 50 gallons of lemonade to American Flatbread in Waitsfield, which is currently selling it on tap at the Big E in Springfield, Massachusetts.

“In the future, I’d like to increase production and move to a certified kitchen,” Schwartz said of his plans for Noah’s Fizzy. “In the long term, I’d like to add additional flavors and get more kegs so I can increase production,” he said, “because right now, I’m currently limited in storage and how many kegs I can have.” Schwartz also has plans to bottle or can his drink.