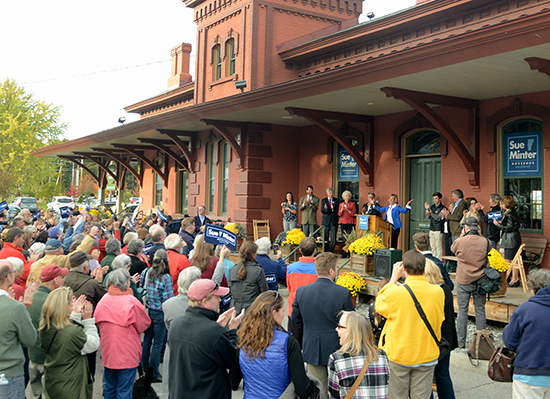 Sue Minter launched her bid for governor of Vermont today in her hometown of Waterbury surrounded by Vermont state leaders, community members and family. 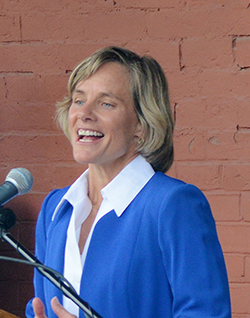 Minter said that Vermonters’ inspiring display of cooperation and determination to recover from Tropical Storm Irene played a large part in her decision to enter the race for governor.

“I have had the extraordinary privilege of seeing Vermont in its toughest times – and also at its best,” Minter said. “The best of Vermont is how when we’re all in, we make the impossible possible.”

Minter was introduced by former Governor Madeleine Kunin, who served from 1985 to1991; former Lt. Governor Doug Racine, who served 1997 to 2003 and was secretary of the Agency of Human Services; Heidi Gortakowski, who Minter taught skating and mentored since she was 11 years old; and Tom Drake, principal of Crossett Brook Middle School in Duxbury and an Irene flood survivor.

Minter was Vermont’s secretary of transportation until last month when she stepped down in order to run for governor. In 2012, she served as the state’s Irene recovery officer following Tropical Storm Irene, where she received national and statewide attention for her leadership of Vermont’s disaster recovery efforts. From 2004 to 2010, Minter represented Waterbury, Duxbury and Buels Gore in the Vermont House of Representatives.

Minter lives in Waterbury Center with her husband, David Goodman, and children, Ariel and Jasper. For more information visit www.SueMinter.com.