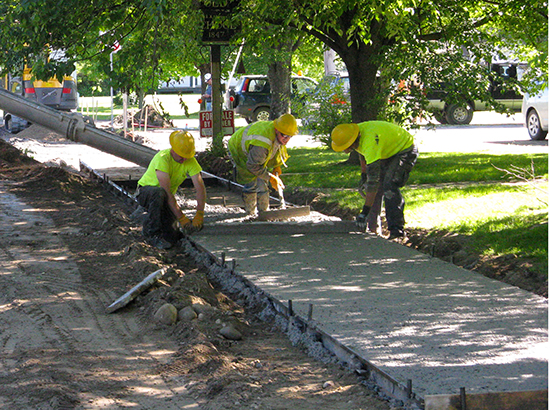 “You’re a long way from it,” said Waitsfield Select Board chair Paul Hartshorn to the project manager, suggesting that the design plan for the second phase of the town’s west side village sidewalk was almost completed.

Kevin Russell, project manager for the second phase of the west side village sidewalk, which runs from the Valley Players Theater to the intersection of Main Street and Bridge Street, came before the board on September 28 to talk about the process of how this sidewalk phase had been handled and, while he tried to avoid specifics of the design, the board was not willing to avoid discussing their issues with this project.

Russell admonished the board several times to refer to the previous two decades of studies and public outreach that, he said, led to the specifics of this current design that have the board concerned.

The select board takes issue with several elements of the proposed sidewalk design, including the crosswalks, some sidewalk extensions that bump out into the travel way as well as some loss of parking and the specific impacts on Waitsfield Wine Shoppe – which would lose its three pull-in parking spaces. The board has concerns about the layout and design of the sidewalk and whether it should be curbed and whether it will match the existing sidewalks.

Russell contended that the board’s issues had already been addressed in the previous studies and sidewalk projects over the past two decades.

“You have an obligation to read those reports,” Russell said.

Board member Scott Kingsbury said that, despite the reports, the project was “not in his mind anywhere close” to shovel ready.

Russell tried to steer the board back to the issues of process versus design. At a previous meeting, board members had expressed concern over the fact that there was a committee working on this sidewalk project and the board was not aware of it. Town administrator Valerie Capels provided the board with a project timeline, explaining that the town applied in July 2013 for a grant for this project. It was awarded in October 2013. The town accepted the grant in April 2014 and in June 2014 signed the agreement with VTrans. In January 2015, the town advertised for a project manager and Russell was hired in February.

“The first thing I did was confirm with Valerie that the people who served on the selection committee for my services seemed logical to select the engineering firm. We prepared the RFP and received two proposals. The committee met again and recommended an engineer. The board hired Stantech on in June and the committee met on June 24 at a meeting attended by reps from VTrans. We reviewed the scope of work, the known issues and used the existing documents to guide our work,” Russell said.

The same group met on July 27 and Capels provided the select board with an update.

WORK WITH THE TOWN

“I’m reading through the duties of the project manager,” said Kingsbury, “and I see ‘work with the town.’ We’re the town; it doesn’t say committee.”

“The concern I had was about the committee, but the issues I had have to do with the plan. I have a hard time with anyone looking at these plans and saying ‘this makes sense.’ I’m sure there were templates made of sidewalks in other towns. The deep concern I had wasn’t the little changes but how anyone could feel this was a good plan to start with. When that plan comes here and is presented to us, it’s not that this is phase one of a committee; it’s presented as the town’s plan for a new sidewalk and there are still lots of issues to be worked through here,” said board member Logan Cooke.

“There was significant support from property owners for the plan. I do owe Joan from the Wine Shoppe an apology for not sounding empathetic about her losing her parking for the project,” Russell said.

“There are some other areas here where you’re trying to design us to look like you want to be designed. It seemed like when we did the site visit that the issue of parking in the village has been forgotten. There are so many crosswalks it took away parking. That really got to the select board. And the bump-outs where you thought it was safer, bikes are going to come to those and swerve out in traffic,” Hartshorn said.

“I’m not here to talk about the design elements in detail. I wanted to deal with the process and how we arrived at the layout we showed you. We made a decision as a team. We’ve created a layout for you to review. That layout is a result of the planning process on a 22-year continuum. We provided the engineering firm with the taxpayer-funded reports and studies to help guide this process,” Russell said.

“I’d like to refer you to each and every one of those reports. I know what you’re saying, Paul, that this project takes away parking. I’m starting to feel like a project manager sitting here alone without an engineer and other planners to support the design. I’m on your team,” Russell added.

“I’d be happy to help out. I’ve already talked to VTrans about this project, such as the constraints on bus pullouts and parking,” board member Kari Dolan said.

“The board needs to pay more attention to this project. It’s a consequential project,” Russell said.

“I think it is important to have another public meeting and bring these changes back to this board and the public. We’ve shared some common concerns we have at this meeting and the last one you attended,” Dolan said to Russell, who asked her to recap those concerns.