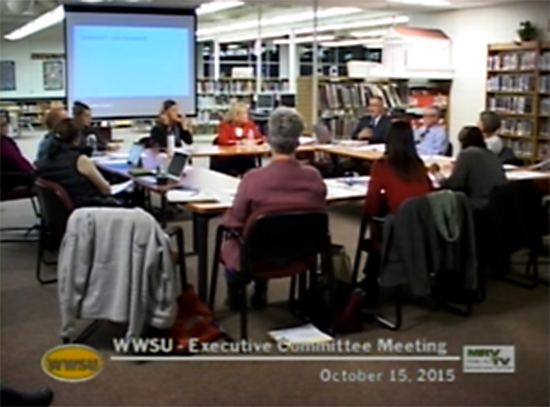 Last Wednesday, October 14, was the first meeting of the study committee that was formed to investigate how Act 46, which seeks to consolidate school districts across the state by 2019, could look like for the Washington West Supervisory Union (WWSU).

At the meeting, WWSU Executive Committee members and WWSU Study Committee members listened to a presentation from the supervisory union’s consultants, Walter Nardelli and Jeff Maher, about financial savings and educational opportunities that could come with the new law.

Nardelli has worked in education for 47 years, most recently serving as principal of the Williston School District, which has 1,250 students in kindergarten through eighth grade.

“I’ve worked in a lot of different systems over the years,” Nardelli told the commitees last Monday, but Williston, which is a part of Chittenden South Supervisory Union (CSSU), “is sort of a similar structure to what you have here,” he said.

Likewise, Maher has worked for supervisory unions and schools across the state, and “I’ve got a pretty firm grounding in systems work,” he said. Currently, Maher serves as principal of Stowe High School.

In working with the WWSU on Act 46, “We’re not here to tell you what to do,” Maher said of himself and Nardelli. “Our role is to help you understand the law,” he said. The two are part of a team of 35 consultants currently working with supervisory unions across Vermont and their role is also “to keep you in touch with what’s happening throughout the state,” Maher said.

“You’re taking a big step forward tonight by having this study committee and engaging in this dialogue,” Maher told the WWSU.

“I look at your performance data and you’re already a good school system,” Maher told the WWSU committees, “but that is a really tough place to be in some ways,” he said.

When it comes to education quality, “moving to the next plateau is very, very difficult,” Maher said, but Act 46 opens up new opportunities.

“The idea is that we’ll have the ability to share resources on a needs basis,” Nardelli explained, giving the example of expensive science kits that are only used for one unit and can be shared between schools.

Likewise, with Act 46, the supervisory union could hire professionals that specialize in areas such as the arts to travel between schools and teach, “and then you’re reducing disparity,” Maher said.

But where will the WWSU get the money to do that?

By consolidating the six school districts of Washington West into one unified school district, the WWSU can save money on treasurers, bookkeepers and audits, Nardelli explained, which currently are done separately for each school.

In the past, schools transitioning to a unified district have also shared custodial staff, sports and performance facilities and professional development programs. In addition, “you invest a lot of money in hiring,” Nardelli said of WWSU’s six school districts, and having one unified district could reduce that cost.

“Instead of going out and hiring again, why not move people between schools?” Nardelli said of teachers and staff, who as a result would have “more flexibility and job security,” he said.

SOME LEVEL OF SCHOOL CHOICE

Act 46 also increases flexibility for families who—depending on what the WWSU decides—could have the ability to choose which Valley school their child attends based on convenience or programmatic interests.

“I think this is probably one of the biggest plusses that would apply to Washington West,” WWSU superintendent Brigid Scheffert Nease said of Act 46. “Right out of the gate, parents could choose which elementary school to send their kid to,” she said, explaining that parents call her all the time looking for a way around the current constraints.

“Could we come up with a creative way to set a limit and have it be geographically bound?” Scheffert Nease said of allowing for some level of school choice.

GETTING OUT OF THE COMFORT ZONE

Another option under Act 46, Scheffert Nease said, could be sending all of the sixth-graders that currently attend the Valley elementary schools to Harwood Union Middle School, or sending the seventh- and eighth-graders that currently attend Harwood Union Middle School to Crossett Brook Middle School. Another option could be closing the Valley elementary schools and building one school for kindergarten through eighth grade, she said.

“I’m just trying to get you out of your comfort zone to think about the possibilities,” Scheffert Nease told WWSU committee members. Whatever happens, “it will always be your choice,” she said.

After hearing from Nardelli, Maher and Scheffert Nease, board members said they were compelled by the increased educational opportunities that could come with Act 46 but asked whether the financial savings that come with consolidation would cover their cost, given the state’s current education funding formula in which tax rates are disproportional to bottom-line budget increases.

“We don’t know the answer,” Scheffert Nease said in response. “But either this is going to happen to us in 2019 or we can do it ourselves,” she said of the different options for transitioning to one unified school district.

“We can only change what we can control,” Scheffert Nease said, and so the study committee will continue to look at what consolidation could look like for Washington West.

Information about Act 46, including presentations and fact sheets, is available on the WWSU’s website at wwsu.org/act-46.php and footage of WWSU Study Committee meetings is available through Mad River Television at mrvtv.com.