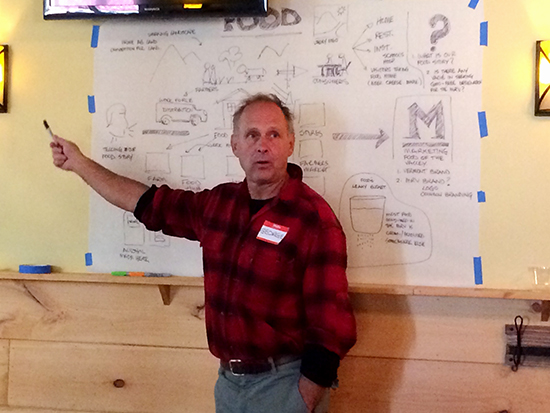 “The Valley has a bunch of really creative people because they want to live in this kind of environment,” Mad River Planning District (MRVPD) Steering Committee chair Bob Ackland said. Last Monday, October 19, a group of residents came together to think of ways to attract even more creativity to the area and – more importantly – how to keep it here.

Last Monday’s meeting at the Hyde Away Inn and Tavern in Fayston was the final part of an ongoing Economic Vitality workshop series that took place this summer and fall. The series is presented by the MRVPD and the Mad River Valley Chamber of Commerce following an economic study of the region that was completed in 2014. The workshop series and the data it produced will be incorporated into a second Economic Summit this December.

Attendees from the previous nine workshops spoke up for their sector of the local economy last Monday in an exercise that asked them to envision their “dream world,” facilitator Patricia Floyd instructed. They broke up into three groups – the creative economy, recreation and food production – to talk about what The Valley does well and what it could be doing better.

“We can’t be all things to all people,” one business owner said, explaining that The Valley needs to find its niche within the recreation industry.

“I’ve seen a place grow because the community came together and supported one thing,” another business owner said. But what could that one thing be?

Last Monday, sector representatives kept coming back to the idea of “authenticity.”

As it stands today, “every other ski town in Vermont has been spoiled,” one business owner said, referring to overdevelopment in areas like Killington, but “we have incredible natural constraints on growth,” he said, speaking of the mountains lining both sides of the Mad River.

Moving forward, sector representatives agreed that economic growth in The Valley should not compromise the region’s landscape or character.

Another thing most sector representatives agreed upon is that The Valley needs more young people.

“We are the food truck of ski areas,” one business owner said, referring to the region’s eclectic, do-it-yourself mentality. “Brooklyn hipsters love this place,” he said.

“This community, as it stands today, has a lot of appeal to millennials,” another business owner agreed, “but they don’t know it’s here.”

In talking about millennials, conversations turned to The Valley’s Internet and social media presence.

“We need cohesive hashtag management,” one business owner said, explaining that the region is not taking full advantage of marketing opportunities on platforms like Instagram and Twitter, which identify trending words in order to reach larger audiences.

When it comes to food production, “we need a logo,” one business owner said, explaining it could be something with the words “Mad River-produced.”

As for the sales of locally grown vegetables, “I think we’ve done a fantastic job,” another business owner said. “It’s low-hanging fruit,” he said – no pun intended – explaining that the community has shown a lot of support for the agricultural industry.

“But that’s what we want, that low-hanging fruit,” another sector representative said, explaining that The Valley could do even more to capitalize on its success in the farm-to-table movement in Vermont. “We’re trying to leverage what we have,” she said.

A PLAN FOR POT

Another example of low-hanging fruit, one business owner said, could be the legalization of marijuana.

Many sector representatives agreed that it will probably happen in Vermont, “and I think it would be really key for The Valley to have a plan for this,” one business owner said, speaking to the tremendous amount of revenue the weed industry could generate for the region.

Indeed, with the development of marijuana growing operations, “Vermont would become an agricultural state again instantly,” one business owner said.

“But is this consistent with our vision for The Valley?” another sector representative asked. If the region becomes known for weed, “some people might not want to come here,” she said, such as young families with children.

When talking about future legislative changes, those in the creative economy group made a point of bringing up environmental changes.

Right now, The Valley’s economy revolves around skiing, “but 20 years from now, skiing is over,” one business owner said, referring to the impending effects of climate change. “We’ve got to bring in alternatives.”

Already, “on a rainy week up here, there’s nothing to do here,” one business owner said, and sector representatives discussed the need for more year-round facilities.

One business owner brought up the idea of making The Valley a wellness destination like Sedona, Arizona. “We do have some of these facilities already,” she said, referring to massage therapists and acupuncturists. “They just need to be brought into the loop.”

Another solution to The Valley’s reliance on the seasonal ski industry could be the creation of some sort of shared maker space, as well as gallery and performance venues for exhibiting their creations.

As it stands now, “there’s so much red tape” for starting a new business in the area, and The Valley needs to work on “encouraging entrepreneurship,” one sector representative said.

There needs to be that mentality of “bring your ideas – there’s people here who are going to help you,” one business owner said, and others suggested the creation of residency programs for young people looking to learn from artisans and craftsmen in the area.

Throughout the course of last Monday’s meeting, sector representatives ensured all that was said was also drawn or written down on several pieces of large poster paper, which the MRVPD and chamber collected and will incorporate into a presentation of the Economic Vitality workshop series to the community on December 17.

In planning for the future, “this is a good solid group of people who have a ton of resources on hand,” Floyd said.