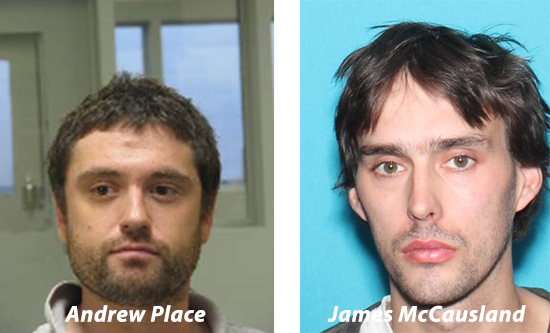 Below is a press release from the Vermont State Police.

Two men have been arrested in conjunction with two arms robberies at the Waitsfield branch Northfield Savings Bank oin April 28 and May 5. The Vermont State Police Bureau of Criminal Investigations for the Middlesex Barracks concluded a lengthy investigation into the two armed robberies and investigators identified Andrew Place (dob: 1/1/86) and James McCausland (dob:7/2/88) as being responsible for both armed robberies. Investigators learned that Place entered the bank with a handgun during both incidents while McCausland waited outside and drove the getaway vehicle.

Based on information gleaned relative to both subjects being homeless and transient the Vermont State Police requested and was granted assistance by the Us Marshals in locating and arresting Place and McCausland for the armed robberies. Andrew Place was arrested by the US Marshals in Florida and is currently being housed at the Broward County Corrections awaiting extradition back to Vermont. James McCausland was arrested in Maine on unrelated charges and is also awaiting extradition back to Vermont.