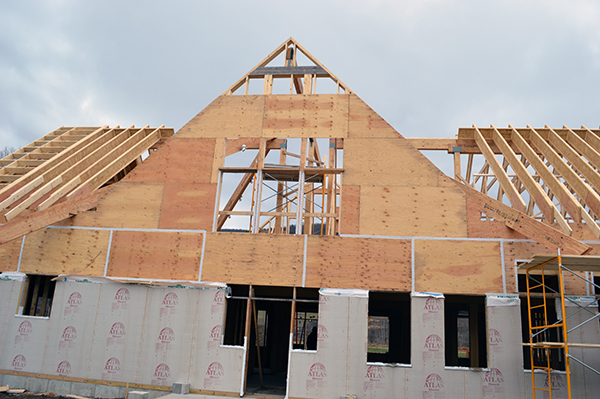 The roof of the new Waitsfield town office was framed in 18 inches lower than the plans called for and the select board, at an emergency meeting on Sunday, November 22, opted to have the roof redone so that the project can be built to the original specifications.

The board met on Sunday with project architects Bill Gallup Bill Maclay of Maclay Architects, Waitsfield, to consider the options. The general contractor, Dave Pratt of Millbrook Building and Remodeling, was not at the meeting, although he had been in contact with town administrator Valerie Capels as well as Gallup and Maclay prior to the meeting.

“We’re not here for a blame game; we’re here to find out what to do to move forward and get this building done,” said board chair Paul Hartshorn after opening the meeting.

Gallup explained how the contractor had read the plans and misunderstood the fact that the center gable is a different roof pitch than the rest of the building. He showed drawings which when inspected carefully show the differences in pitch, but those differences might be missed without knowing what to look for.

“The problem was not caught by our firm and it wasn’t caught by the engineer and the general contractor feels strongly that while he made a mistake, we had a chance to point it out,” Gallup said.

“This sounds like a contractor error to me,” said board member Kari Dolan.

“Are we afraid of hurting feelings? Somebody made a mistake. Of course, it’s about the blame. Someone made a mistake and this is about who is going to pay for it,” said board member Logan Cooke.

Gallup and Maclay explained several options to the board, including accepting the mistake as it was made.

Gallup and Maclay explained that the impact of the large gable being 18 inches too short would fall primarily on the large public meeting room on the second floor. It will reduce square footage and headroom. Accepting the mistake means the town would have to live with that.

Another option is to raise the roof timbers on one side of the center gable, which would give the town back all but 30 square feet of the meeting room.

The last option would be to reconstruct the roof to the specs. Doing that would mean a cost, the architects said, but not to the town. Rather the general contractor, engineer and architectural firm would split those costs.

“We have been heavily involved in trying to find solutions. This is an issue between the town and the general contractor and we both agree that there should be no financial consequences to the town,” Gallup said.

The board discussed timing with the architects and learned that reverting to the specs for the project would take about a week and raising only one part of the roof would take three or four days.

Hartshorn voiced concerns about the interior wood being exposed to the elements as well as the concrete of the floor and vault and suggested that mold would become an issue.

“We’re rotting as we speak,” added town resident Mike Kingsbury, adding “It’s our fault that this happened because we went with the low bid and decided not to have a clerk of the works.

With permission of the grantors that have provided funds for this project, Waitsfield opted out of having a clerk of the works for the project, instead retaining the architects to make an extra visit per week.

“Voters looked at this when they voted for it and it got drawn up. I think we’d be shirking our duty if we didn’t have them build what people voted for,” Hartshorn said.

The board voted unanimously to have the project built as drawn and the architects will report back on the issue of water and mold.