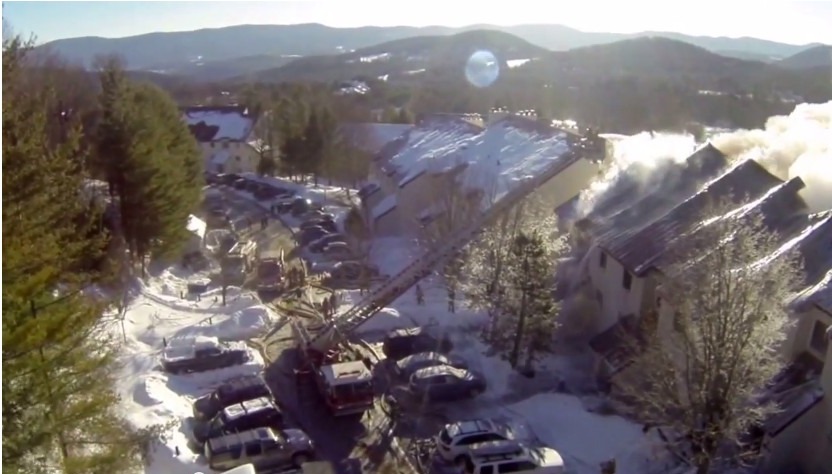 The board of the Mountainside Condominium Association has been in mediation with the state of Vermont over the Agency of Natural Resources denial of an Act 250 permit for the association to rebuild the 36 units that burned in Sugarbush Village in February 2014.

The February 2014 fire completely destroyed one of the three buildings that are part of Mountainside. The complex was completely full on the night of the fire, which required the Warren Volunteer Fire Department plus six additional fire departments to extinguish.

The April Act 250 denial hinged on the distance between the condominium and Rice Brook, leading the commission to find the project not in compliance with review criteria covering floodways, stream impact, soil erosion and conformance with local and regional plans, Criteria 10.

Mountainside was originally permitted in 1979 with Act 250 approval. After last year’s fire, association members hired a firm to design and engineer the rebuild and also selected a general contractor. The association had received state wastewater permits as well as local permits from the town of Warren, which require that the project conform to Warren’s Town Plan.

Mountainside had already received its local permits from the town of Warren. The Warren Development Review Board found that the project, as proposed, did not increase the nonconforming aspects of the previous structure (height of building, stream setback and parking space size); rather it decreased them by lowering overall height, changing parking space size and increasing the distance from the stream bank.

Jeff Ladner, vice-president of the condominium association, took some time this week to answer questions from The Valley Reporter about the Act 250 mediation process and how the effort is going.

VR: How many units will be in the new building? If there are fewer than original, who loses a unit? How was that determined?

Ladner: All of the original 36 units will be rebuilt, period. There has never been any serious consideration on our part to do otherwise, though the District Commission of the Natural Resources Board did so in assessing our Act 250 application.

VR: What changes have you made to the existing project to get approval from the state? Are you further removed from the stream?

Ladner: We are in discussions with the Vermont Agency of Natural Resources (ANR) and the Natural Resources Board (NSB) on this topic. There are some minor changes being considered, but there has not yet been any formal agreement.

VR: Did the state compromise anywhere?

Ladner: In our discussions with the ANR and NRB we’ve had the opportunity to fully explain the restrictions and limitations the site presents and the challenges in meeting all the town, state, fire department and ACT 250 requirements. These requirements are not all complimentary and the ANR and NRB appreciate the little trade space we have to work with.

VR: How soon can construction begin now and when do you anticipate it being finished? You had already selected a contractor; will you use that same firm or conduct a new search?

Ladner: Our number one objective since that catastrophic event has been to rebuild as soon as possible and get those displaced owners back in their properties. These 36 owners and their families have endured heartbreak from the loss to the fire and extreme hardship from the subsequent delays. We as an association are doing everything we can to push this project forward and it has been very frustrating to everybody to have to overcome these obstacles. The Act 250 application was started in August of 2014 and this protracted process has certainly pushed the start build date further to the right than we ever envisioned. Until we have that Act 250 permit, and there are one or two minor but necessary permits to obtain after that, we cannot give an exact start date. We started this with a local design/build firm and the entire design team has been exceedingly supportive and responsive. We are planning on an 11 ½ month start-to-finish schedule, but we’ll be looking at every opportunity to shorten that.