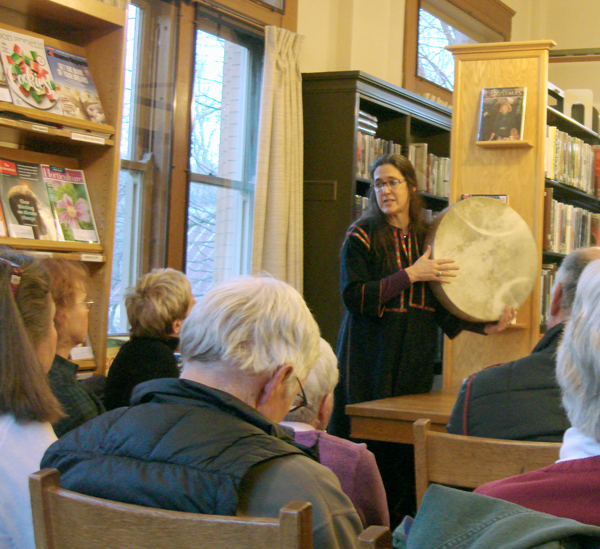 “The news would have you believe there are no more Syrians left in Syria,” said author Deborah Felmeth, but although civil war has devastated much of the country in past years, she explained, Syrian culture is alive and beautiful – and worthy of a deeper look.

On Sunday, December 6, the Joslin Memorial library in Waitsfield hosted Felmeth, who presented stories of her experiences in Syria between 1991 and 2011, sourced from her book Syria, Remember Me, published locally this year.

Felmeth traveled to Damascus in 1991 to witness the effects of the Gulf War, “because I knew I couldn’t learn anything about the Middle East from America,” she explained. After finding work as a teacher in an international music school, she became enamored with the country and its people. She learned Arabic – full of “poetry, ritual speech and graciousness” – and met her husband.

Until the onset of Syria’s civil war in 2011, Felmeth and her husband divided their time between the Old City of Damascus and Addison County in the Green Mountains of Vermont. Both hope to return to Syria on a more permanent basis when political conflict subsides, and Felmeth points out that displaced refugees often wish for the same.

Felmeth estimates that 4 million Syrians are currently looking for somewhere to settle outside of Syria – “although that number is hard to find,” she explains, as many have lost their documents or have intentionally hidden them in order to gain entrance to certain countries – but a loftier 5 million to 8 million have been transplanted within the country.

Both those within and outside of the region are part of a rich legacy that is, Felmeth said, “multi-ethnic and poly-religious.” Take, for example, she said, a Muslim mosque that sits atop remnants of a Roman temple to the god Jupiter, which is layered upon an ancient Armenian temple to the God of Thunder.

Damascus, Felmeth said, possesses at least 9,000 years of known history, and excavation sites along the Euphrates River have shown archaic remnants of the transition from round to square-shaped architecture. Here, human history runs deep and Felmeth said that “archaeology is the right combination of science and dreaming.”

Felmeth discussed further connections that Syrians share with the land, such as when villagers refused to relocate after the Syrian government alerted them that the construction of a dam would demolish their mud-brick houses on the banks of the Euphrates. “They said, we will move when the river moves,” Felmeth recollected and she found “something extraordinary in that.”

Nomadic Bedouin groups in the Syrian Desert have lived similarly – their movement timed according to amounts of grass and water available to their sheep, goats and camels. But modernity has certainly encroached upon a traditional pace of life and Felmeth has observed the strange fusion of handspun goat hair tents with Mack Trucks parked outside. These vehicles are much more efficient than the camels that they once used to transport entire settlements across the desert as land dries up, she explained.

Felmeth has also seen how the inclusion of satellite TV and Internet has transformed the way that Syrians think of themselves and each other. They now have an “outward looking” toward what others possess and, therefore, what they might potentially possess. This is an immense change to have occurred in a span of 20 years and Felmeth remembers just two television channels when she arrived in 1991.

Syrians remaining within the country have seen a host of adverse effects from what Felmeth called a “morally reprehensible and illegal war” – such as ravaged agricultural and economic systems, electricity cuts throughout the day and the perpetuation of violence through the involvement of other countries. “The only people who will benefit from this war are weapon manufacturers,” Felmeth said.

The author stresses the importance of reforming education and said that this is the only way to instate authentic democracy. She recalls a workshop she led for educators in which she asked them to invent activities that could use music to teach academic subjects like math. “Brainstorming was a foreign concept to them,” Felmeth said, but they must not be blamed. She explained that rote learning has been central to their educational philosophy, but that this must change, as democracy demands creativity and critical thinking.

Amid these difficulties, Felmeth said that Syrians are modest yet intimate and that generosity, hospitality, dignity and honor are “the pillars of their culture.” They also possess some of the greatest cuisine in which meat is used sparingly, often mixed with grains, and of their hot yogurt dishes, Felmeth said. “We don’t have anything like it.”

The book’s title is drawn from one of Felmeth’s unique memories of sailing on the Euphrates at the borders of Turkey and Iraq. One passenger, an outspoken woman who curiously questioned Felmeth about her time in the region, asked, “Do you love Syria?” to which Felmeth said that she did. Upon leaving the boat, the woman removed a ring from her finger and threw it quickly toward Felmeth to catch and called out in Arabic, “Remember me!” Felmeth said that the woman “acted on something that’s human” and that “she saw me as some connection to a wider world.”

Syria, Remember Me is published by Bard Owl, an imprint of Voices of Vermonters Publishing Group of Shelburne, Vermont. It is a limited edition hardcover with 200 color photos, available at independent bookstores and online at syria-remember-me.com. Felmeth told the Joslin library audience that this documentation “captures a Syria we will not see again. Or certainly, we will not see it for a very long time.”