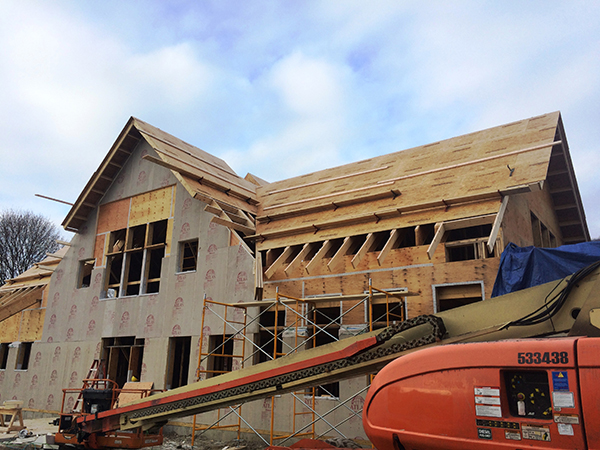 The roof of the Waitsfield town office, currently under construction, was raised up by 18 inches to correct a construction error and keep the building true to the proposed drawings, bid and plans.

Late last month the select board learned from project architects Bill Maclay and Bill Gallup that the contractor’s interpretation of the plans had resulted in the roof of the gables that face Route 100 and the Flemer Field being framed in 18 inches lower than planned.

The board held an emergency select board meeting on Sunday, November 22, to discuss the issue with the architects. The general contractor, Dave Pratt of Millbrook Building and Remodeling, was not at the meeting, although he had been in contact with town administrator Valerie Capels as well as Gallup and Maclay prior to the meeting.

At the meeting the board considered several options, including leaving the roof lower – which would result in loss of space in the large public meeting room on the second floor where both headroom and square footage would be lost.

Another option was to raise the roof timbers on one side of the center gable which would have given the town back all but 30 square feet of space in the meeting room.

The last option would be to reconstruct the roof to the specs. Doing that would mean a cost, the architects said, but not to the town. Rather the general contractor, engineer and architectural firm would split those costs.

The board voted to have that done, to remove and raise the rafters, which has now been completed and the building is restored to its planned interior and exterior specifications.