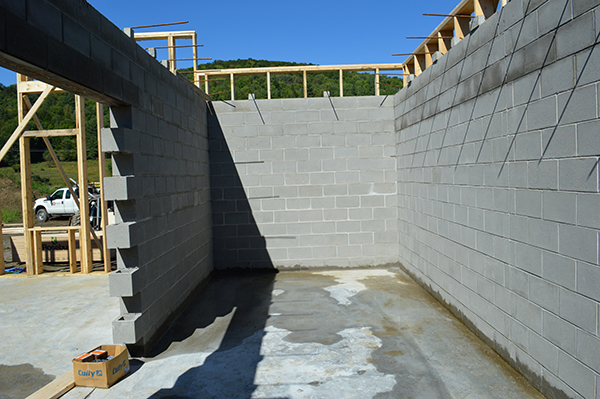 Mold around the vault and on some interior studs at the Waitsfield town office prompted a special select board meeting last week and a discussion of how to remediate the mold.

On Thursday, January 28, the Waitsfield Select Board met with representatives of Crothers Environmental, Morrisville, who were hired to assess the situation at the town office, currently under construction at the north end of Waitsfield Village.

Chris Crothers and Chris Clement explained their findings to the select board, architect Bill Maclay of Maclay Architects and members of the public and the town office building committee.

Clement, who conducted the assessment at the town office, reported that he found evidence of water intrusion and moisture in the cavity between the concrete block vault and the exterior wall.

“There was mold growth in there, limited to that wall cavity,” Clement said, explaining that he had created several options for remediating the mold.

He also said that there were several other spots in the building where mold was found on the studs. Dealing with the vault cavity mold would require pulling off the exterior sheathing, drying out the wood and cement and providing some kind of treatment.

Clement explained that he had been called in by Maclay after select board chair Paul Hartshorn noticed mold around the vault two months ago.

Several board members questioned the timing of the Crothers inspection, noting that the mold was discovered in December.

“The reason nothing was done immediately was because the building hadn’t been closed in yet,” Maclay said.

“Why wasn’t it covered?” asked Hartshorn.

“As discussed at earlier meetings, we don’t have the authority to tell the builder how to go about his job, only when what is being done is not consistent with the contract. They were aware there was mold,” Maclay told the group.

He said that the contractor had acknowledged that there was mold and would tear off all the plywood in the vault area.

He added that there is mold on the plywood, studs and frame and said that the solutions the specialists had come up with all involve removing the plywood. Studs, he said, are harder to remove.

Asked about the extent of mold in the building, Clement clarified that he had seen some evidence that there was mold growth on the studs prior to them being used on the building. He said he identified mold near the staircase and on the second floor.

“Contractors get their lumber from a lumber yard. We build outdoors. All wood that comes to your site is going to have some mold on it. What Chris looked for was moisture issues, water sitting on top of wood. What happened here was that when they built an enclosure around the block wall there was moisture in there and it acted like a petri dish,” explained Chris Crothers.

“The exterior wall by the vault was left uncovered. When I went there that day they removed sheeting to show it and there was a lot of organic debris that fell in there, frozen, and shows a significant amount of moisture in there, probably rainwater entered that wall cavity,” Clement said.

“Once you get rid of the exterior sheathing the framing can all be cleaned and salvaged, but before it gets closed up, it needs to be dried out,” Crothers added.

Maclay explained the recommendations from Crothers Environmental to the group.

“They recommend remediating, cleaning and encapsulating (painting) which is typical for what is done in the industry for this issue,” Maclay said, explaining that the encapsulation involves painting with an antimicrobial paint that is made for mold suppression.

MOISTURE IN THE CAVITY

Crothers noted that the antimicrobial paint has a life of 15 years or longer or less, but said, “The key here is if you have moisture in the cavity, you’ll have problems. In this case it should not be a problem.”

He explained further that the affected area would have to be enclosed and dried out and that moisture meters would be used to determine when the wood was dry enough to be treated. He said that once the area was staged for drying out, it could probably be dried out in 48 to 72 hours.

The board asked questions about air quality after the treatment was done and learned that the area where the mold was most prevalent is between the north end of the vault and the exterior wall of the building.

“There’s no shared airspace between that cavity and the rest of the building. The block wall creates a physical barrier to prevent the mold from infiltrating. I did do some air tests in the building and they all came back clean,” Clement said.

Hartshorn asked if there were mold spores on the blocks and Crothers said, “There will be mold spores in there forever. Mold is not the problem unless the spores land on something with a high moisture content.”

The specialists had four recommendations for treating the mold. All the studs and plywood and framing could be removed and everything rebuilt. That is not standard in the industry and they did not recommend it. Another option is to paint the back of the studs and paint the concrete blocks with the antimicrobial paint. That solution is complicated by the fact that there is only an inch or less between the back face of the studs and the concrete block. They also recommended spray foaming the entire cavity which would encapsulate the mold so that the spores could not go anywhere and moisture could never get back to the mold. A final choice would be to put new plywood back on and fill the cavity with an injected foam that fills the cavity.

“I like the spray foam option. It is my preferred alternative,” Maclay said.

“If your contractor brings on a mold consultant they will fight this tooth and nail. Here, the way I’m looking at this project, is that you have new materials and a new structure and it’s not right. They need to step up and make it right. If we were to make a recommendation we’d go with the spray foam as well,” Crothers said.

“I need to add one thing. If you’re doing spray foam, that encapsulates itself. Gets into every nook and cranny and doesn’t require the antimicrobial paint as well,” he added.

Asked about the cost of the fix, Maclay explained that it would cost about $4,000 but would be offset to $2,500 by work the contractor would not have to do in that space.

Bob Cook, who serves on the town office construction committee, cautioned the board against making a motion calling for a specific method of remediation.

“You’ve had a professional come in and they made recommendations to you. Whether you skinny the options down to one, the contractor still has to buy on or pursue another approach or recommend another approach,” Cook said.

“This is an owners’ meeting. The contractor is not here. They’ll get a decision from us,” said board member Sal Spinosa.

Maclay said that the contractor has an obligation to deliver the project per the specs and said there’s a risk that if the town tries to impose a solution there would be pushback.

“I’d recommend that the board not vote a position. Professionals have come forth, made an evaluation and recommended some solutions. The contractor is a player in the ultimate decision and you will have played your cards by selecting or recommending. I’d hold my cards and let what’s being developed here be delivered to the contractor,” Cook added.

The general contractor is Dave Pratt of Millbrook Building and Remodeling.