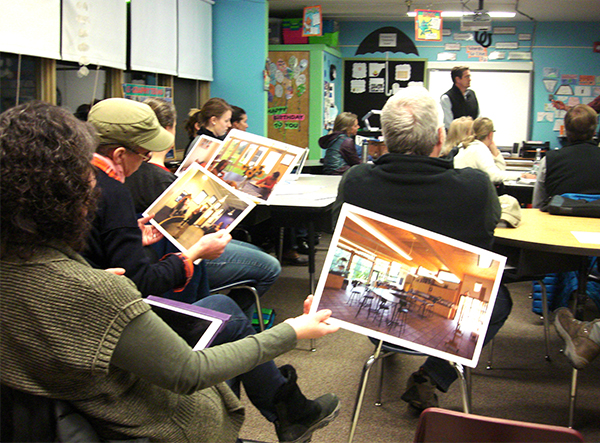 “Buildings speak,” said architect Dave Epstein of the Burlington-based architecture and design firm TruexCullins. “Some schools you look at, they could be saying, ‘I’m a hospital or I’m a prison,’” he mused, adding that Warren Elementary School has “friendly features.”

On February 2, three architectural companies pitched ideas of how to improve the school – both technically and aesthetically – after submitting proposals in December of last year. The Warren School Board selected TruexCullins to complete a series of major repairs to the building, the cost of which remains unknown.

Vermont School Boards Insurance Trust (VSBIT) recommended a series of repairs for Warren to complete back in 2009 and Washington West Supervisory Union (WWSU) superintendent Brigid Scheffert Nease reported safety violations associated with the incomplete repairs to Secretary of Education Rebecca Holcombe this past September. Holcombe told the board that they must proceed with repairs to the building and grounds as soon as possible.

TruexCullins will have one month to produce specific ideas, as well as a finalized cost and timeline for the project. It is not currently known when the project will begin or be completed. They will be paid an amount that is not to exceed $19,800 for this initial research phase.

Epstein and his colleague, Cam Featherstonhaugh, both of whom represent a branch of the firm that deals with school construction and design, will be heading the project. They will conduct multiple community forums throughout the process.

TruexCullins was selected among Black River Construction of Springfield and Maclay Architects of Waitsfield, but both board and community members were impressed by each company’s proposal. One community member reflected, “They were all surprisingly similar in quality.” Sanford Strauss Architects of Waitsfield declined to proceed with the application due to a lack of time.

In a January 27 meeting of the Act 46 study committee, members viewed financial projections that considered how an estimated bond of $3 million – which Warren School Board members said was merely a “hypothetical number” – would affect homestead tax rates when distributed equally among Valley towns with the Act 46 budget consolidation. Using a $300,000 homestead property value to project costs, WWSU property taxpayers could pay a shared cost of $11 in the first year, $39 in the second year, $38 in the third year and so on, as it decreases slightly over the course of 20 or 30 years.

Washington West Supervisory Union (WWSU) superintendent Brigid Scheffert Nease advised caution when considering these numbers, as all variables that determine homestead tax increases were not included. The Warren School Board will release a finalized cost for the bond in early March after Town Meeting and the town will vote on the bond in late April.