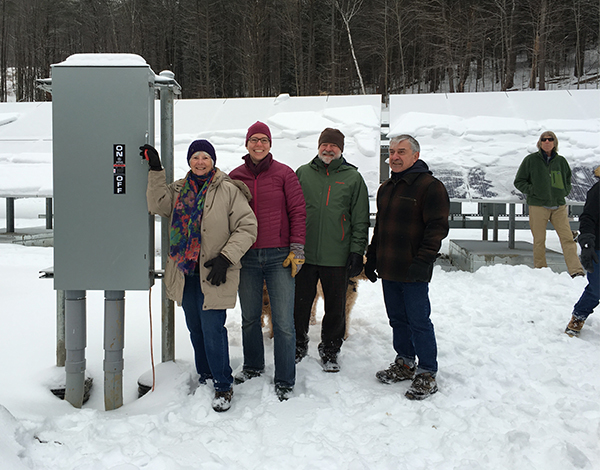 The Mad River Community Solar Farm came online at the end of last year and its members are just now receiving their first electricity bills with the solar energy net metered.

At 9 a.m. on Wednesday, December 30, the switch was flipped powering up the system with a dozen of the farm’s member-managers present. There are some 36 member-managers of the solar farm. By opening the farm in 2015, members will realize a federal tax credit on their 2015 income taxes.

The project is a collaboration between Nils Behn of Aegis Renewable Energy in Waitsfield and Eric Brattstrom and Dotty Kyle of Warren. The project allowed individuals in the community to purchase panels to offset their electricity use at their homes via group net-metering. It operates as a private, member-controlled LLC.

Since announcing their plans to develop the solar farm on two parcels of land behind and north of the Big Picture Theater and Allen Lumber on Carroll Road in Waitsfield, organizers sold all 616 trackers in the installation.

Those panels are designed to generate nearly 6 kW of power – enough to handle the needs of an average household. The cost per watt for the solar farm is $2.87, which gives members ownership of their panels and a share in the company, which owns the facility’s infrastructure. Annual operating costs are divided among the members based on the percentage of the total array. As the project is structured when people buy the panels to offset their power use at their homes, they retain ownership of the panels if they move or they can sell them with their property.

The panels are fixed panels versus trackers and the farm will produce 150 kW, enough power for approximately 30 to 40 families. The solar farm location is in close proximity to the large electrical transmission lines needed to bring the power into the grid. There are wetlands on the lots and the modules will be mounted on driven piles to avoid disruption of the soil.

The owners of the farm have drafted and adopted an operating agreement. Voting on issues related to the operation of the solar farm is based on one member, one vote. Couples, partners or businesses each constitute one member. The members have entrusted the day-to-day management of the company to an elected executive committee consisting of president, secretary, treasurer and two at-large members. Those executive committee members include Dotty Kyle, president; Jeff Jaffarian, treasurer; Kate Stephenson, secretary; and at-large members Jito Coleman and Geoffrey Wade.