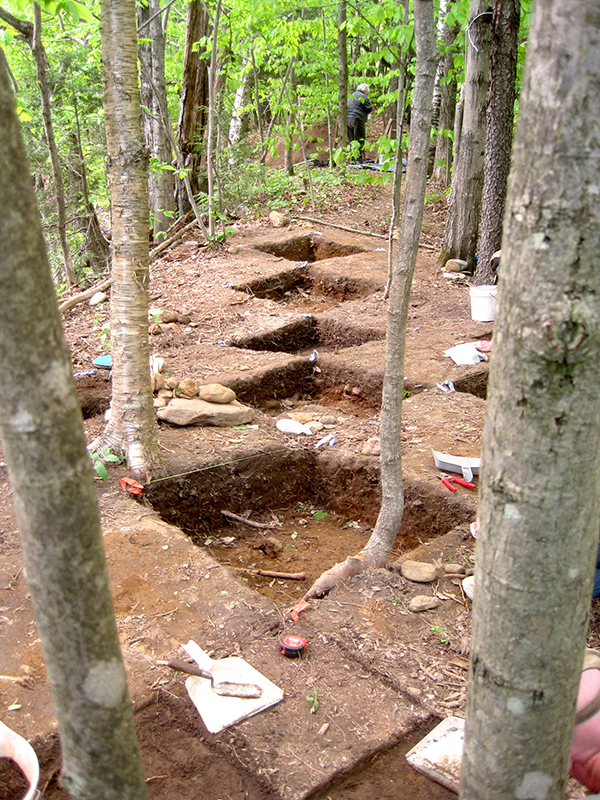 “These mountains hold a lot of information regarding past lifeways,” said Green Mountain National Forest service archaeologist Tim Watkins. And Vermont state archaeologist Jess Robinson spoke about the rich history that must be contained within The Valley floor—that “there are lots of sites to be discovered.”

Most archaeological excavation occurs in response to proposed development projects. In 1970, the Legislature passed Vermont’s Land Use and Development Act, or Act 250. The Natural Resources Board (NRB) was created to assess the impact of large-scale development — whether posed by towns or businesses — on communities and natural environments.

Projects are evaluated for their potential to pollute or disrupt the air quality, water supply, soil condition, highway systems, educational facilities, municipalities, historic value and even “scenic beauty” of the landscape. A permit to develop is administered if damage is not foreseen. In 2013, the state collected over $2 million in permit fees from approximately 300 applications.

The Vermont Division for Historic Preservation (VDHP), with a staff of three professional archaeologists, reviews project plans and determines whether the area proposed for construction has been mapped as potentially rich in remnants of past cultures. In 2015, the VDHP reviewed over 2,000 projects.

While Act 250 contains a standard that addresses the safeguarding of historic sites, the Historic Preservation Act of 1966 preceded it and requires that all federally funded or permitted projects be evaluated for the potential loss of cultural materials and knowledge.

If the site is thought to be potentially worthy of preservation, archaeologists may be contracted to excavate. But “many sites don’t make it that far,” Robinson said. Although the majority of archeological work performed in Vermont follows development plans, very few of the total plans will require digging to be done. Still, the Vermont Archaeology Heritage Center (VAHC) houses millions of artifacts from 750 excavations across the state — pottery, food remains, products of stone tool making, dugout canoes and on and on.

Archaeologists are contracted through private firms, such as the University of Vermont’s (UVM) Consulting Archaeologist Program, which was established in 1978. It usually takes up to two years for the VDHP to receive a final report of the findings, Robinson said. 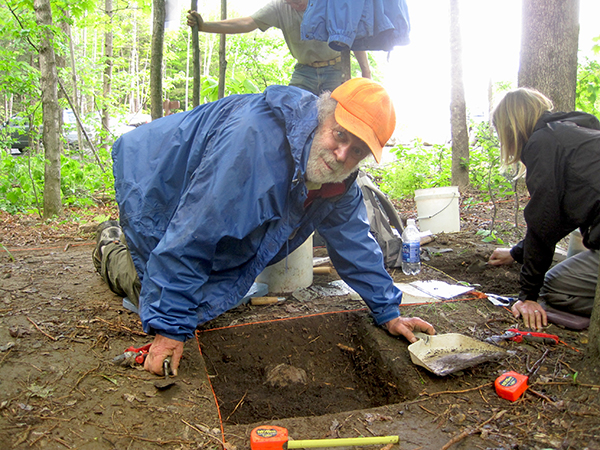 REMNANTS OF AN ANCIENT WARREN

In 2010, the U.S. Forest Service proposed to construct a parking lot along Route 100 in the vicinity of Warren Falls and prior modeling of the land revealed that it was a “sensitive area,” Watkins said. An excavation was conducted by the forest service, which owns and manages the land and employs its own archaeologists.

Dave Lacey, the service’s archaeologist during that time — who Watkins called “one of the great faces of Vermont archaeology” — led a survey of the area with several volunteers and discovered a prehistoric Native American site. It contained a high-density concentration of quartzite flakes — that is, the debris left over from making stone tools.

The most common artifacts found throughout Vermont are these stone waste materials. The makers used certain types of stone that mimic properties found in glass, so that pieces can be shaped along even planes in a “process of very controlled breakage,” Robinson explained.

“This site is the furthest upstream pre-contact site known to date, so that is an exciting development,” Lacey said. Although the artifacts do not lend themselves to precise dating, “given the dynamic nature of the flood plain area and the relatively shallow nature of the deposits, I think we should assume the site is from the last 2,500 years or so,” Lacey speculated.

The forest service continued exploring in four excavation sessions through 2012 with a host of volunteer diggers recruited through the VAHC. This further investigation yielded thousands more quartzite flakes and demonstrated that a small prehistoric group worked on their tools temporarily at the site, most likely having brought the stone materials from elsewhere. They were “likely traveling along a well-worn trade route coming up the Mad River and down the White River to the Connecticut and beyond,” Lacey said.

“You need to have a little bit of an eye to determine that something is culturally produced, rather than just being some natural shatter,” Robinson explained.

These artifacts were cleaned and catalogued at the VAHC in Barre, which has served as a central repository for artifacts since 2012.

“There’s still potential in there, to find out more about that site,” Watkins said, but he wondered where the time and money for further analysis could be found. He added that here on the East Coast, where native groups were either relocated or extinguished during colonization, oral histories regarding how the land was once used seem to have vanished. “That would’ve helped to deconstruct the past,” he said — but this loss of knowledge “adds to the challenge.”

Some sites discovered in The Valley are of colonial origin, 500 years old or so. The Ozias Atherton Farmstead site, which spans Moretown, Waterbury and Duxbury, was excavated by UVM in 1989, contracted by the Vermont Agency of Transportation (VTrans) due to a bridge replacement project. This site represents early 19th-century settlement and small-scale farming practice in Vermont, dated 1810-1830. Glazed teapots, factory made tableware, glass bottle fragments, disintegrating knives and bricks that contain fingerprints of the makers were found.

Some sites have little to do with proposed development projects or state intervention, such as several findings by the amateur archaeologist and collector William S. Fowler. In 1954, Fowler sighted a projectile object with flat channels on the sides — what is known as a fluted point — in an area that he described as “1.5 miles south of town, southeast of Swamp Brook,” in Moretown. Other archeologists have since described this area as Waitsfield, based on its reported distance south of Moretown. The object is thought to be 10,000 to 13,000 years old; humans inhabiting this time period were Paleo-Indian — the first people to enter the Americas.

Fowler discovered many more artifacts throughout Vermont, including a series of ceramic pots found in Duxbury.

Robinson said that approximately 30 Paleo-Indian sites have been found in Vermont with the majority located in the Champlain basin. Archaeologists have modeled how Paleo-Indian groups may have traversed the state and one of their suspected paths extends through The Valley. On the other site of the Green Mountain range, Winona Lake is rich in Paleo-Indian heritage.

If more evidence of Paleo-Indian sites is to be found on the East Coast, Robinson said, Vermont is the place. Most of the state’s beach fronts are preserved, whereas in other eastern states, land that existed thousands of years ago is now below sea level.

Remnants of human lives are usually demonstrated with artifacts, not remains of bodies, Robinson said. Excavating burial sites is best to be avoided, as bodies should be respected and the Native American Graves Protection and Repatriation Act (NAGPRA) of 1990 requires that human remains be returned to the communities from which they originate — a highly precarious process.

TO DIG OR NOT TO DIG?

Although archaeologists devote their time to understanding and performing excavations of land, Robinson said that excavating is not always preferred. “Archaeology is a destructive science,” he said. “Any time you excavate you disturb the natural placement of artifacts and their relationship to each other.” Looking ahead 100 years from now, he mused, technologies like computer modeling, 3D rendering, 3D printing and other analytic tools will be much more advanced. He added, “Our reconstruction of the past gets better and better.”