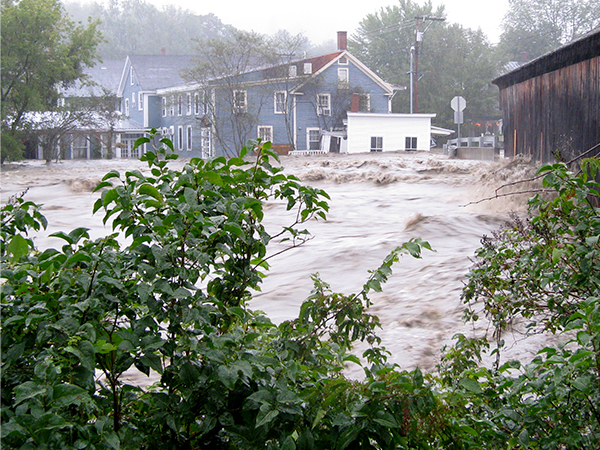 Members of the Waitsfield Select Board and the public met with Ned Swanberg, Vermont’s flood plain manager, this week to discuss how and whether to develop a pocket park in the flood plain and floodway.

The board, at its February 8 meeting, had the chance to ask questions of Swanberg about how the state would look at a permit for the park.

The town has a grant to develop a pocket park, a small park on 0.05 of an acre of land on Bridge Street where a photography studio used to be. That studio, which was between the covered bridge and the blue building that houses Peasant restaurant, was destroyed during Tropical Storm Irene in 2011.

The grant that the town has is for up to $180,000 for which the town is responsible for a 10 percent match. The grant is a design/build grant meaning that the shape, scope and look of the project will be created during the permitting and review process.

Board members asked Swanberg about what the flood plain and floodway regulations meant for the proposed site.

“It’s definitely a precarious site. A big concern for the town is that you’re part of the National Flood Insurance Program. As part of that program, the town has certain responsibilities particularly with the floodway, which is a smaller section inside of the flood plain. The area where the photography studio used to be and the park would be is in the floodway and the flood plain. The floodway is specifically protected through the National Flood Insurance Program,” Swanberg explained.

He further explained that the flood plain is where the river goes when it goes over the bank and that happens with regularity.

“The special flood hazard area, the floodway, is a legally defined area that the National Flood Insurance Program focuses. It’s modeled for extra protection,” he said.

The area where the pocket park is proposed is partially in the floodway. Waitsfield’s zoning administrator Susan Senning pointed out that after Irene, the former owners of the photography studio did preliminary permitting work to rebuild and determined that only a small corner of the building was in the floodway.

Swanberg told the board that it would be possible, with careful consideration, to create a park in that area and that the goal is not putting something there that is going to deflect water to other buildings or the bridge.

“It’s possible to do something that’s not creating a greater barrier to the water. My job is not to say what that is but to explain the boundaries,” he said.

Board member Scott Kingsbury asked whether the town is liable for damage to adjacent buildings if the town builds a park in the floodway.

Swanberg told him that the National Flood Insurance Program (NFIP) is about trying to create safer spaces over time, not necessarily solving all the problems.

“There are places where buildings are exposed. You may not be able to make a safer building through regulatory review. But the intent is that such buildings get improved or substantially improved,” Swanberg said.

Board member Kari Dolan asked whether adding fill to the park area would have the effect of displacing water so much that it would potentially result in added risk to nearby buildings. Swanberg said, “Yes, that could happen.”

“The river runs right at that corner. It would be really good to be attentive to what is happening in that area. To know about fill, hydrological and hydraulic testing would be needed,” he added.

Kingsbury pointed out that the former photography studio had been there for 100 years.

NO FLOOD WITHOUT THE BUILDING YET

“It had a foundation. The water that came towards that corner caused it to blow back and into the parking lot and into the buildings. We haven’t experienced a flood with that building gone yet,” Kingsbury said.

Were the town to build a park that was noncompliant with NFIP guidelines, community members would lose the ability to purchase flood insurance and FEMA could suspend the community.

“That would mean that we’d have to decide not to be enrolled in the program and revise our own bylaws to get around the rules. Right now the flood hazard area standards are incorporated into our bylaws. To decide we’re not going to abide by them gets us in trouble with FEMA and violates our own bylaws,” Senning said.

“We’re in the flood plain and if we violate its regulations we can jeopardize anyone else getting flood insurance in the community? Would this be a violation of that?” asked town resident Neil Johnson.

“What do you think our chance is of getting permits for this?” Johnson asked.

“If something is proposed for development in the floodway, it may be possible to do, but it has to be supported by proper engineering. The more you create obstacles in the floodway the more complex and difficult it is. It becomes a very expensive engineering project,” Swanberg said.

Board member Kari Dolan asked how the town could minimize flood hazard potential in that area.

“In a floodway you have to be very careful about triggering a review. In the special flood hazard area I think the town bylaw already says not new fill. Within the parameters of that, a project could be proposed to the Development Review Board, that explained we’re going to take stuff away, put stuff back and net new fill,” Swanberg said.

Engineer Steve LaRosa with Weston and Sampson, who is currently working on preliminary parts of the project, told the board he had been involved with the project since the Vermont Downtown Action Team projects identified it in 2013.

“I understand the town’s need to get themselves up to speed on what’s required. I’m not the engineer who’s going to do the design out there, but we’ve been involved and have done some thinking about it. No one is going to do a design that you folks don’t approve. This is your project. We can’t design something that is counter to your zoning or counter to how the floodway and flood plain is managed. There isn’t really any risk of a project being designed that wouldn’t be approved,” LaRosa said.

Johnson asked if all the constraints and concerns were conveyed to the people from whom the grant came.

“None of this is a surprise. These are all the complexities of the project. The budget is a bit larger than other projects in design and permitting. The soft costs are larger because of the complexities that exist,” said Joshua Schwartz, Mad River Valley Planning District executive director.