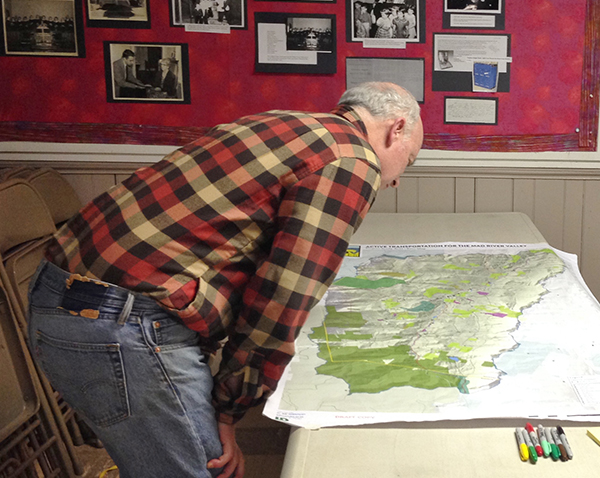 Since last fall, the Mad River Valley Planning District has been assessing how, why and where people are moving around in The Valley. The planning district hired the Burlington-based SE Group — consultants who design community spaces, landscape architecture and resort areas — to consider how The Valley’s transportation system might be improved and expanded.

On February 11, at Waitsfield United Church, members of the company presented a few of their findings and asked the community for feedback on the MRV Moves Active Transportation Plan — still in its early stages.

Executive director of the MRV Planning District Joshua Schwartz talked about the “interface between recreation and transportation.” The district hopes to create an improved system especially for those who would like to explore nonmotorized transport that is safer, available throughout the year and provides connections between Valley towns. They have asked where trails, bike lanes and sidewalks might be needed or wanted by those traversing The Valley.

The district, in collaboration with the consultant group, also considers how they can mitigate any negative effects of development on The Valley’s natural environment and associate planner Drew Pollak-Bruce of the SE Group said that the plan will incorporate the watershed, flood plain and wildlife habitat concerns.

The planning district is also interested in how transportation could incorporate more tourism and, therefore, economic success.

When those surveyed were asked what transportation projects they would like to see constructed in The Valley, they chose an off-road path along Route 100, new walking and biking infrastructure and more trail tourism, said Pollak-Bruce.

“There is a really unique culture here,” said Pollak-Bruce, where “people are very active.” The planning district and the consultant group will continue working toward strengthening The Valley’s transportation network so that residents can stay active while looking for opportunities to generate revenue.