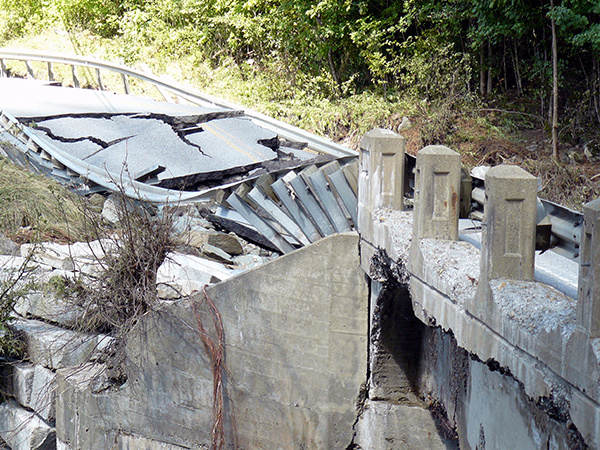 A portion of Route 100B that lies about a quarter mile south of Moretown Village will be remade into a short one-lane stretch of highway in the coming weeks. The road sits on a bridge constructed in 1928, which the Vermont Agency of Transportation (VTrans) found to be deteriorating last year.

The decking and entrances to the bridge were severely damaged during Tropical Storm Irene in 2011. The bridge was repaired and reopened shortly after the storm.

VTrans employees met with the Moretown Select Board on February 16 to discuss the upcoming project. Structures bridge maintenance engineer James McCarthy said that the agency has concerns about the structural soundness of the bridge rail and rail posts and that “It’s time to do something.”

Concrete deterioration on the bridge is creeping toward the middle and concrete posts are wearing thin.
The agency has considered several options to repair the bridge, such as installing new guardrails while maintaining the road’s two-lane capacity. “But the bridge is too narrow and can’t support anything new,” McCarthy said.

In the past weeks, VTrans has installed traffic light poles on each end of the bridge and will complete the lights in the upcoming weeks.
The agency will also conduct a scoping study in which they will “look at doing anything from A to Z,” McCarthy said — including bridge replacement. If this is needed, the bridge would be closed temporarily.

Crew members must inspect the area from within the river, but the frozen water makes this a dangerous task for the time being. They will collect data on traffic, roadways and environmental resources which will inform their overall study.

VTrans will produce a scoping report by the end of the year and there will be a public meeting during which the agency will present options and alternatives to the town and public.

All construction will be funded by federal and state dollars.