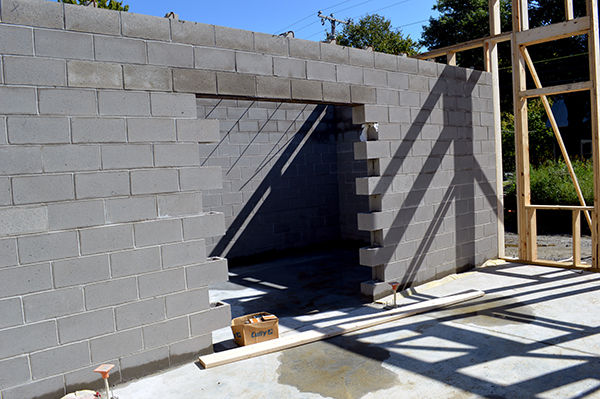 Dave Pratt, owner of Millbrook Building and Remodeling, the general contractor for Waitsfield’s new town office, reached out to The Valley Reporter this week to discuss the public perception of several issues with the project.

“It seems like I’m considered to be virtually 100 percent to blame for what are perceived as the glitches,” said Pratt, who has a long history of successful public and private building projects in Vermont.

The issue, he said, is not simply the roof elevation or the mold around the vault area. It has to do with timing and communication, he said. Pratt noted the town office project was determined to be over budget after it was put out to bid and there was a delay while the town waited to find out if it would receive more grant funding.

“I signed a contract on June 20 and the project never got going again until mid-July. I agreed to hold the price for 90 days instead of 60 or 30. The architects weren’t supposed to talk about the project while they were looking for additional funds,” Pratt said.

What that led to, however, was an inability for him to have the lead time on some very custom building materials.

“There were some beams that were so elaborate that they’re made when you ordered them. We were given the name of a place in Alabama from the architects to source those beams and they’d been closed for two years,” he said.

“There were very specific dowel baskets needed to pour the concrete. SD Ireland normally made these dowel baskets. We didn’t need to worry about a six-week lead time with them, but the engineer refused to let SD Ireland even submit a proposal to make them. We lost a month waiting on the concrete,” Pratt recalled.

Regarding the roof, portions of which were built 18 inches lower than they were supposed to be, Pratt said that the elevation in question was not on the plans.

“My share of the blame was that they said I should have asked. I had the architect and architect’s assistant come over and look at it and the structural engineer was there, checking my work to make sure it was right. They were all there and not one of them caught it and they’re the ones who had written it. I still had to take a third of the blame for that because they said I should have been more persistent,” said Pratt, who estimated that the roof rebuild cost him about $7,000.

He said that was on a Monday and he had his crew keep working through the week, only to find out that the roof elevation was wrong at the end of the week.

“Why couldn’t they have said so earlier?” he asked.

“I’m also on the hook for two $3,000 doors that didn’t get priced because very experienced window suppliers didn’t find them on any plans. When you’re doing a bid, you’re on a timeline,” he said.

Asked if there was any chance to go back and true up project costs when it is completed, Pratt said he mentioned it and he wants to, but he can’t let it stop the progress of the job.

The beams, the doors and the roof were the big things, according to Pratt, who noted that there were some stub columns that had to be ordered which delayed when he could get the second floor up.

“Then there were some other items that held the columns together that were so special. The way the columns went in was very vague, it bordered on a cut through. I was under the impression that these could go on as we were putting in the beams so we went ahead and put up the walls and then couldn’t proceed right to the second floor so the walls were uncovered for another few weeks and that’s when we were building the vault,” he said.

“During this time we got the vault built and the 2-by-6 walls against the vault. Even if it hadn’t been exposed to the rain you’d have moisture from the vault sweating. The question was, if you don’t cover it, it won’t get wet, but there will be no ventilation. I opted to keep it open; it was six of one, half dozen of another. I figured the sun will shine, the wind would blow and it would dry out. I thought it was better to let it air out. Admittedly it was a 50-50 proposition. There would have been mold anyway. You’d either get the mold because of the rain or because of the stale air and sweating. Either way there was going to be mold. And even if it was to meant to blame it, it made me very sad to read it,” Pratt said.

He had high praise for Crothers Environmental, the company that did the mold inspection around the vault, calling them the foremost authority on mold in the area.

While the mold remediation is under way, Pratt is working hard to keep the project on its timeline.

“My job is to create peace of mind. That where I’ve obviously failed on this job. None of this is how I do business. None of this has ever affected a project and I’ve never held a project hostage for any reason. Getting this project done comes first. I don’t know how much money I’m going to lose. I’m just plugging away,” he said.