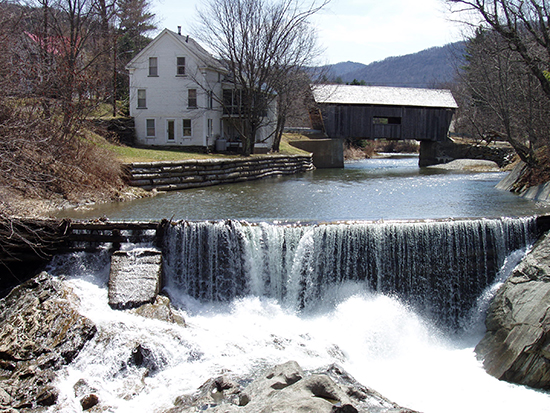 “We are living in a modern environmental age,” one community member said, “and dam building is over.”

On February 17 at the Warren Town Hall, a group of about 30 residents shared their opinions regarding the fate of the town’s 200-year-old timber crib dam which sits in the river just north of the town’s covered bridge.

Others expressed strong disagreement. “I am going to speak for the history until I’m dead,” said Dorothy Tod, who lives in close proximity to it.

The Warren Dam Preservation Trust, which obtained ownership of the dam in 2004 and is now headed by architect Dave Sellers, organized the public hearing in preparation for Town Meeting on March 1. Warren’s Town Plan contains an article (No. 15) that asks whether the town should maintain the dam and further set aside $3,000 annually to fund maintenance for the dam.

Once an integral part of a bustling mill town, the wooden structure is deteriorating. In 2009, 2012 and again in 2015, the trust applied for stream alteration permits to repair the dam, but the Agency Natural Resources (ANR) repeatedly denied them.

In general, the ANR wants to see structures that were previously installed in waterways throughout Vermont either removed or left to deteriorate, so that rivers are allowed to return to their natural states.

In July of 2013, members of the trust told the select board that the trust would give up trying to obtain a permit and they offered the dam’s easement to the town. The select board declined the offer due to its inherent liability and instead started investigating what it would take to remove the dam from the river entirely.

In a recent Warren Select Board meeting, board chair Andy Cunningham said that if someone makes a motion for the town to accept ownership of the dam at Town Meeting, they will continue to refuse it. “They need to see that there’s an end game here,” Cunningham said. “The state is pretty firm in what they’ll let happen — which is nothing.”

With different ideas regarding the dam circulating in past years, Sellers asked, “Are there ways to reconcile these differences?” He said that “the manmade world and natural world are coming together in this little chunk of Vermont.”

He added that the dam cannot be seen as separate from the covered bridge and properties that line the river — that the community must “look at systems” and not at the dam in isolation.

But executive director of Friends of the Mad River (FMR) Corrie Miller said that there is “quite a discontinuity created by this dam for the whole river system.” She said that it blocks sediment from flowing downstream, increases erosion and is likely to cause flooding in the future. She cited a study conducted by consulting firm DuBois and King in late 2013, in which it was found that flood heights are likely to decrease by several feet if the dam is removed.

RIVER WILL BE SAFER

Others were not concerned primarily with the river itself. “It hurts the environment, yes it does, but there are people too,” one community member said. Another commented, “It’s inconsiderate to think that the river should come before the people who live around it.”

Miller emphasized that environmental concerns are tied to the people who inhabit the environment — that residents’ properties will most likely see less destruction with flooding and the river will be safer for people to explore and play in.

FMR board president and Warren resident Kinny Perot said that after the flood of 1998, she saw “how much danger people could be in” and is “looking into the future rather than into the past.”

“No one can argue that the river would be healthier without the dam, but who pays to remove it all and who pays for the repercussions?” asked architect Ellen Strauss. Others said that repair and maintenance would be expensive as well and wondered who would pay for that project?

Miller said that it would be costly to remove, but that the money would go toward protecting and stabilizing properties along the river.

Although the dam does bring in revenue for the town directly, Tod said that with tourism as The Valley’s reining industry, “this dam serves that.”

Some focused on a revival of hydro power. “This is a changing time,” Strauss said, “and I’m not sure that the days of hydro are done.” But others countered that “the effort to make it hydroelectric is doomed.” One community member said that instead of reviving hydropower or any other form of energy efficiency, “let’s do energy conservation” and refrain from using so much energy to begin with.

The historical value of the dam was approached again and again, but many were not persuaded. “The iconic picture up there on the wall,” referring to a photo of the dam, “is going to be replaced by another iconic image,” said one community member. “Our time here is limited.”

And, finally, some community members wondered if people should be living by the river at all, to which Sellers responded, “That’s just the nature of human beings. There’s always someone who will try to live in a tricky place.”