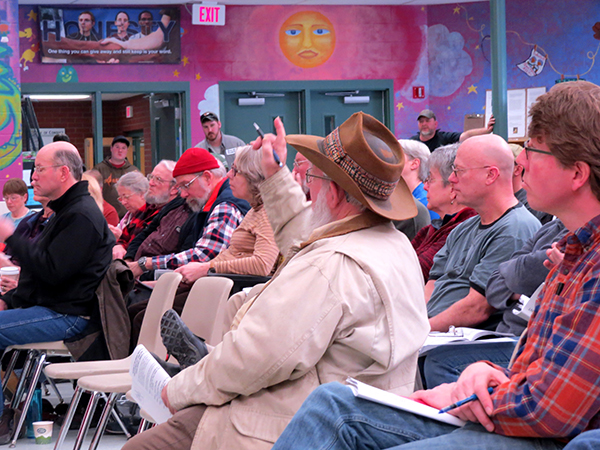 Duxbury voters elected a new town clerk at Town Meeting this year. Longtime town clerk Ken Scott was nominated for the position along with select board member Maureen Harvey.

Harvey received 86 votes and Scott 70. Harvey indicated that she would step down from the select board to take the job, which the select board has suggested to voters can be a 24 hour a week job. This year, for the third year in the row, the board proposed reducing the salary of the town clerk — this year from $36,000 to $25,000. In previous years, voters had changed the salary back to the prior year’s amount. That did not happen this year.

Anne Wilson and Ken Scott were also nominated for town treasurer, a position for which the select board increased the salary from $16,728 to $26,000. Wilson won by a voice vote. Wilson has been working as assistant treasurer for the town since January.

By a voice vote, Duxbury voters approved an article calling for elected officials enrolled in town benefit plans to make the same financial contribution as town employees do. Voters also questioned the number of hours elected officials worked and at what level they qualify for benefits and retirements. Both 24 hours a week and 32 hours a week were suggested. One resident proposed providing benefits for the town treasurer as well as the town clerk.

There was a proposal to add $5,000 to the budget to be used to pay the outgoing town clerk to help the new town clerk get up to speed, but that failed on a voice vote.

Voters spent a fair amount of time discussing whether to spend $43,000 for 4,330 yards of gravel to be used to fix sections of five roads — Ward Hill, Richardson, Dowsville, Devlin and Pollender roads. Ultimately that motion passed by a voice vote.

But voters were not done talking about roads. After praising the road crew, a voter suggested adding $4,000 to the road crew budget for an emergency or damaging storm. He proposed adding it to the miscellaneous line item. Others voters pointed out during discussion that additional money for storm damage could not come out of the miscellaneous line item. That motion failed by a voice vote.

Following discussion, voters approved a town budget of $928,137 and decided to have taxes paid on October 14.

Tim Cahalan was elected to the school board.

Duxbury voters approved, by Australian ballot, a proposal to spend up to $50,000 to purchase and install a phone system with e-911 capabilities at Crossett Brook and Thatcher Brook schools and also approved spending up to $125,000 to purchase and install an HVAC control system at Thatcher Brook. Both of those articles are funded from the town’s maintenance reserve fund.

Duxbury has 1,000 registered voters of whom 524 cast ballots this week for a voter turnout of 52 percent.