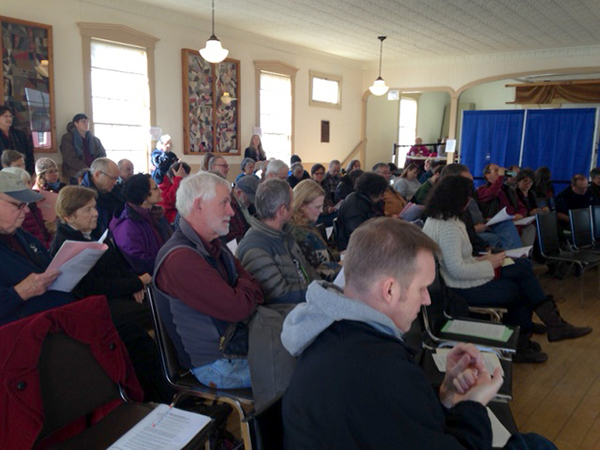 Community members questioned administrative efficiency at the state level and within the Washington West Supervisory Union (WWSU) at Moretown’s pre-Town Meeting and on Town Meeting Day and voiced concerns about how long the bridge at the south end of the village would be limited to one-lane traffic.

At pre-Town Meeting on Monday, February 29, when state Representative Adam Greshin addressed concerns from voters about rising property tax rates, he said that Act 46 — a statewide policy that consolidates and centralizes school management and budgets — would mitigate financial wastefulness.

Greshin said while 277 school districts and 66 supervisory unions currently operate in the state, both of these figures will be lower when districts are consolidated and that cost savings will result.

School board chair Kate O’Neill said that the Act 46 study committee, composed of representative members from each WWSU district, had been meeting since last fall and that “our central office presented us with all of the options of what we might choose,” concerning the merger. Study committee members agreed to proceed with an application for the accelerated option and a May 3 vote is scheduled.

When a community member asked the board why an option to merge more quickly is offered when mergers will undoubtedly take place in 2019, board member Gabe Gilman said that “a number of legislators wanted you to feel like you chose this.”

Another community member said that WWSU costs seem to increase annually, while faculty positions within schools are reduced. Someone asked why the WWSU had hired an additional full-time faculty member in the recent past, but a specific answer was not given.

School board member Tom Badowski said that the WWSU produces a 4 to 5 percent savings that can be seen as a success for a corporation. He added that the central office “saves us more money than if we had incompetent staff.”

A community member responded that while corporations are typically responsible to their shareholders, with the WWSU, “They don’t answer to anyone.” Someone else added, “No one says to get less competent people — it’s just costing too much.”

On Tuesday, the school board passed a budget of $2,470,904 — up 3.2 percent from last year. O’Neill said that this figure incorporates a 7.9 percent increase in health care costs for employees and other “increases that you have to absorb that there’s absolutely nothing you can do about.”

Harwood Union High School (HUHS) chair Deborah Hunter said the school has put forth a budget of $14,219,230, which was passed on Tuesday.

Hunter reported that the school has started to offer new science, technology, engineering and math (STEM) courses — such as computer coding, game design and agricultural hydroponics.

The school has received funding from Vermont’s League of Innovative Schools, a partnership created by the state’s Agency of Education (AOE), in order to implement a policy called proficiency-based learning. She said that the policy requires additional monitoring of students, as they must demonstrate that they possess certain skills rather than simply attending class.

The select board put forth their proposed budget of $1,072,662 — $9,800 more than last year due to staff salary increases — and it was passed by Australian ballot during Tuesday’s Town Meeting. Board chair Tom Martin said that after the town saw its landfill close, “We have a revenue problem or lack of it.”

On Tuesday, Martin told voters that a bridge on Route 100B just south of Moretown Village will be made into one lane with traffic lights and that this could be in place for up to 10 years. The Valley Reporter followed up with Vermont Agency of Transportation (VTrans) structures program manager Wayne Symonds regarding the timeline and Symonds said that the single lane would most likely be in place until the summer of 2017 with a year or two of additional construction.

The bridge was constructed in 1928 and was found to be deteriorating by VTrans last year. The agency will conduct a scoping study to determine the specific project within the next four months and will begin when weather does not pose a risk to complete hydraulic modeling from within the river.

If the bridge can be repaired and salvaged, it would most likely be completed by summer of 2017, Symonds said, but if a new bridge is needed, it could take up to three additional years to secure funding and complete.

Moretown has 1,339 registered voters of whom 631 cast ballots this week for a voter turnout of 47 percent.