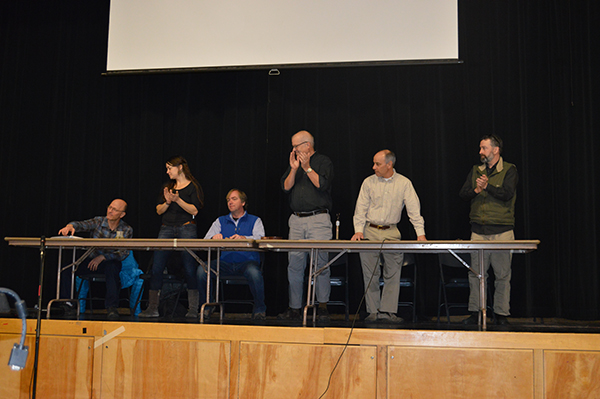 All articles in the Warren town report were passed at Town Meeting with the exception of Article 15, which asked voters whether the town of Warren should maintain a 200-year-old timber crib dam which sits in the river just north of the town’s covered bridge.

The article also requested that the town set aside $3,000 annually for maintenance of the structure and both portions were passed over. Board chair Andy Cunningham said that the town cannot create a line item on the budget for this expense because the dam is owned by the Warren Dam Preservation Trust. In the past, the select board has refused ownership of the structure.

Members of the trust have applied to the Agency of Natural Resources (ANR) for a permit to repair the dam, but they have been denied several times over the past years.

Architect Dave Sellers, who heads the trust, attempted to create a motion to amend the article, asking that the town work with the planning commission to administer a larger region that the dam is embedded within — including the covered bridge and areas where residents fish along the river. He called this the “village river zone.”

The select board said that it is not possible for the public to create a new zoning district from the floor during Town Meeting. A community member then made a motion to recommend that the preservation trust work with Friends of the Mad River to have the dam removed. This motion was passed, but is not binding.

State Representative Adam Greshin, I-Warren, addressed the community about the possible legalization of recreational cannabis, with bill S.241 passed by the Senate on February 25. With Vermont as the first state to vote legislatively rather than by ballot, Greshin said that the bill will be reviewed by five or six House committees before coming to a final vote. He sits on a committee that will assess issues of taxation.

“That’s not easy,” Greshin said, because while the state can allocate a high tax and use revenue for law enforcement, education and the treatment of opiate addiction, a high tax may mean that consumers continue to make purchases within the illegal underground market where the product is cheaper.

Community members asked whether this revenue could be applied to educational spending — to which Greshin replied, “Yes, absolutely” — as well as whether there may be negative repercussions for the environment and for farms that neighbor areas where cannabis is grown.

Greshin said that credit card companies and banks do not typically engage in transactions for cannabis sales because the plant is criminalized at the federal level, but that those in the industry could use Vermont credit unions. “They haven’t worked that out perfectly,” he said.

Community members passed a town budget of $3,850,930 — up 6 percent from last year. Board member Bob Ackland explained that the town included 3.5 percent salary increases for town employees, but that spending in general is not becoming more excessive. Rather, towns are increasingly subject to a host of state fees and “We are paying a lot of money in this town for things that are not happening in this town.”

The community supported Articles 11 through 14, voting to change the length of terms for positions of town treasurer, trustee of public money and collector of delinquent taxes from one to three years. The changes will take place in 2017 and 2018.

School board member Rob Rosen said that Warren still has the lowest per pupil cost in the state and that the board has cut $100,000 from the school’s 2016 budget, primarily with the termination of a faculty member’s contract. Voters passed a budget of $2,543,125.

With board chair Michael Ketchel stepping down after one year of a two-year term and board member Rob Rosen not running for re-election, two new community members were elected.

Jennifer Watkins was elected for Rosen’s seat and Marie Schmukal for the final year of Ketchel’s term. Alycia Biondo and Matt “Chicky” Staples were appointed last year and were elected for a three-year term and one-year term, respectively. All four members were running unopposed.