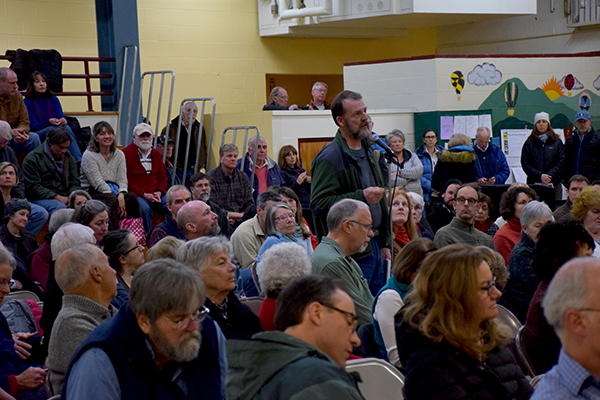 Waitsfield voters elected Darryl Forrest and Anne Bordonaro to the Waitsfield Select Board at Town Meeting this week. Incumbent select board member Logan Cooke has asked for a recount of the vote on the three-way race for his two-year seat. The vote tally was Bordonaro 273, Cooke 267 and Jerome Keating 143.

Forrest prevailed 397-245 in a two-way race with Brian Voigt for a three-year seat vacated by outgoing board member Scott Kingsbury.

"After hearing of the razor close margin, I felt it only appropriate that a recount happen to verify the results, especially considering the new methods for counting ballots. I applaud Anne and know, no matter the result of the recount, the select board will be as competent as ever,” Cooke said.

Voter turnout was high this year, with 56 percent of voters casting Australian ballots and a standing-room-only crowd in the gym of the elementary school for a Town Meeting that began at 5 p.m. Waitsfield’s Town Meeting committee recommended the town try the evening start to see if more people would participate. Moderator Brian Shupe estimated that the number of people participating from the floor of Town Meeting was about 175.

Waitsfield voters spent time discussing Article 5, asking whether the town should borrow money from its own reserve funds to cover expenses as property taxes are coming in. Former select board member Elwin Neill Jr. asked why the town would pilfer from its own accounts when interest rates are so low. That article passed on a paper ballot vote.

Voters approved borrowing up to $120,000 to pave Old County Road and the Waitsfield-Fayston Volunteer Fire Department parking lot and approved setting the salaries for the town clerk and treasurer.

State Representative Adam Greshin, I-Warren, spoke to voters reporting that school budgets are very lean this year and explaining the marijuana bill that had passed in the Senate last week. Greshin told voters that he feels it is extremely important to get the marijuana bill right and said he didn’t want to rush it.

Asked specifically how he felt about the issue philosophically, Greshin said, “I want to be thoughtful and deliberative. I don’t want to get it wrong.” Pressed further on the issue he said he was not philosophically opposed to decriminalization of marijuana but wants to make sure it is done right. He noted that one of the goals of the state is to get rid of the black market for marijuana. Greshin said legislators need to consider that goal when determining how to tax the product and also need to balance that with the need to raise money through taxes, for education and opiate addiction.

Town resident Neil Johnson questioned why the town is providing $5,000 for the Mad River Valley Health Center. He said that the health center has a bank balance of $160,000, which reflects $5,000 from Warren, Waitsfield and Fayston for 10 years.

Duncan Brines, who serves as chair of the health center board of directors, said that was not the case and said that the nonprofit ended the year with a $2,700 loss.

Johnson further singled out the Mad River Valley Planning District and suggested that Waitsfield’s entire contribution ($41,986) to the tri-town planning district be axed.

“We already have a planning commission and we don’t need any more planning. Our issue is that there are not enough uses by right and we turn down too many projects,” Johnson said.

Former select board member Neill has praise for the work of the district.

He and town resident (and select board candidate Brian Voigt) were applauded for their words of support.

Resident Jill Arachi said voters should consider the return on investment that they get from the planning district in terms of state and federal grants.

By voice vote, voters rejected Johnson’s amendment on reducing the budget by the amount of the planning district line item and then rejected his proposal to reduce the budget by $5,000 for the health center.

Prior to the start of Town Meeting, the Waitsfield school district met and passed its budget of $2,433,540 by a voice vote.