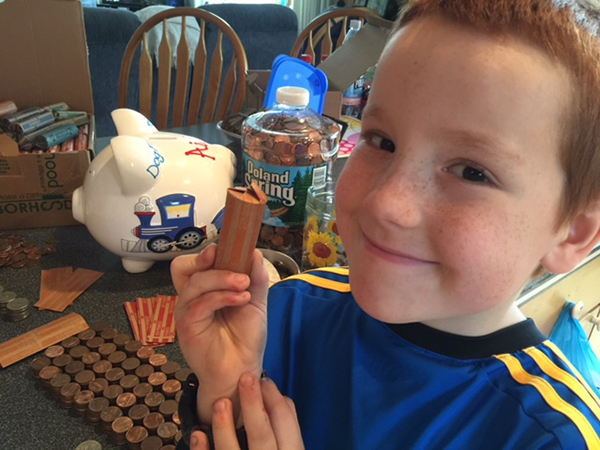 Since he was 4 years old, Aiden Heath, now 8, has saved every single cent he could get in his piggy bank in hopes of buying a service dog for his type 1 diabetes.

“Everything he got for his allowance, his birthday, Christmas, all went into his dog fund,” said his mother, Jenni Heath, Waitsfield.

“Our hope is that he’s saved enough for us to make a deposit on a service dog that is trained to alert us to changes in his blood glucose by the smell of Aiden’s skin,” she said.

As important as the dog is for Aiden’s health and quality of life, his family feels it is really important for Aiden to have a part in this and they are understandably proud of what he has done.

This week Aiden and his family have been rolling the coins and counting the bills in preparation for taking them to the bank. They are hopeful that when all the coins and bills are counted they’ll have close to $2,500, which they need for a deposit on the service dog.

Once they make the deposit, the dog will begin its training, and eight months later they will get the dog. In the interim they will have to pay the balance of the approximately $15,000 that such a dog costs.

Aiden was diagnosed at 3 years old and since that time his life (and those of his family) has revolved around checking his blood glucose levels. All parents of diabetic children are familiar with the constant monitoring of their children’s blood glucose.

“All diabetic parents are up two, three and four times a night checking their kids’ blood sugar. Aiden’s is up and with no rhyme or reason. So many things affect your blood sugar. When he hits a growth spurt, his levels are all over the place. As his mom, I never stop thinking about his numbers. I think about it all the time and he thinks about it all the time,” Jenni Heath said.

Aiden has an insulin pump and a glucose meter that talks to his pump, but he still has to prick his finger to check his blood multiple times a day.

“We have to monitor everything that goes in his mouth. Whenever he exercises that greatly affects his blood sugar. He has to be tested before, during and after a soccer game. If he eats in preparation for exercising and then it rains, we have to monitor him,” Heath said.

His mom doesn’t sleep much because Aiden doesn’t wake up if his blood sugar gets too low during the night. His continuous glucose monitor isn’t 100 percent accurate. And once she checks his sugar and adjusts the insulin or gives him some food, she has to wait 15 minutes to check it again. If it’s not right, she has to adjust it again and wait another 15 minutes. It’s easy to see why she doesn’t get much sleep at night.

The service dog can sniff blood sugar levels 20 to 30 minutes before they actually drop and if Aiden’s blood sugar begins to drop during the night, the dog will jump up on Aiden to wake him up and if he doesn’t wake up, the dog will alert the family.

“We’re looking at a Labrador from Diabetes Dogs of America. The dog will be about a year and a half old when we get it. They start by training them for obedience and while they are doing that, we take saliva samples from Aiden when his sugar is low and high so that they can train the dog to that. They train the dog such that when they are in public it won’t bark or be distracted. He’ll take it to all the places he would normally go, like the ballpark or movie theater. The dog will alert for low sugar by pawing us and for high sugar by rubbing with its nose,” she explained.

For his family, the dog is an added safety precaution. For Aiden it’s a way for him to have some independence.

“He’s been the one to say, I want this dog. It’s an emotional safety net for him. If I’m not with him, the dog is. He’s smart and independent and will want to be more independent. We’re really proud of the fact that he wanted to save the money himself and always put every cent into his piggy bank. He really wanted it and is seeing through this process that if you really want something and work hard you can make it happen,” Heath said.

03/18/16 Update: The Heath family has set up a GoFundMe page for people wanting to donate, you can reach it here www.gofundme.com/exuu6d8k