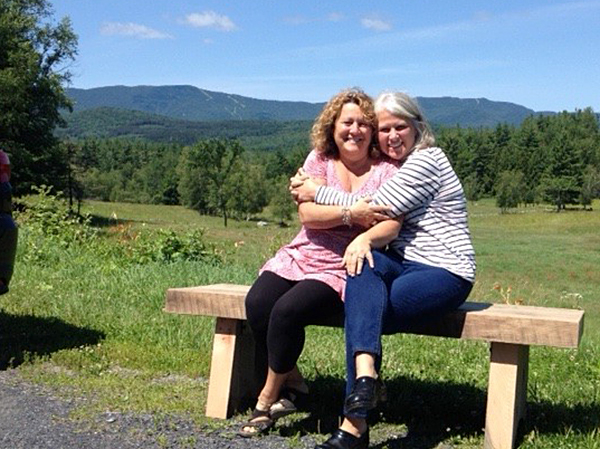 AnneMarie DeFreest and Barbra Gulisano have been named the Mad River Valley Rotary’s People of the Year.

Early on in the process DeFreest and Gulisano came to the town seeking select board approval for a plan to enhance the work that was being done by selling engraved decorative bricks and plain bricks to enhance the sidewalk, selling plaques for benches made with decking from the covered bridge, selling plaques for streetlights on Bridge Street as well as raising funds to create seating by the abutments of the covered bridge.

Their efforts were hugely successful and the resulting engraved bricks on Bridge Street are a large and graphic testimonial to the relationships that people near and far have with The Valley, Waitsfield and Bridge Street.

The pair was helped by friends, family and volunteers in their efforts and they were quick to point out that those people should share the honor with them. They were also honored by the Waitsfield Select Board in this year’s town report for their contribution to the town.

The Mad River Valley Rotary Club, in honoring the women, noted their “tireless efforts and dogged determination orchestrating the Bridge Street beautification project. Their selfless work produced an oasis in Waitsfield with period streetlights and commemorative bricks through rallying the community, working with the select board and shepherding the project to a truly beautiful completion.”

The rotary will fete the two with a three-course, farm-fresh dinner at the Round Barn on April 27 at 5:30 p.m. Tickets are available at www.brownpapertickets.com/event/2519277. Seating is limited to 150 people.

DeFreest has called The Valley home since the 1970s when her parents, Jack and Doreen Simko, bought a farmhouse for themselves and their five kids to ski what was then Glen Ellen.

In 1987, after a few years of working in broadcast journalism and moonlighting for a Boston catering company, DeFreest tucked her communications degree from Emerson College under her arm, grabbed her ski boots and moved to Waitsfield to open what would be The Inn at Round Barn Farm which her parents bought as part of what AnneMarie calls "their midlife crisis." She purchased the business from her parents in the 1990s, purchased the real estate after that and only recently sold it to Jim and Kim Donahue.

“After learning that the rebuilding of Bridge Street had a few parts that could have better options from the creator of my favorite coconut cake ever, Barb, we decided to team up and think of other solutions,” DeFreest said.

“The meaning of community can be found on more than 1,000 engraved bricks, handmade benches and lights that lead the path to our beloved covered bridge. Community was fostered through smiles, laughs and uncountable helping hands. What started as two ladies (and one incredibly supportive husband named Sam) an idea blossomed because of those that call the Mad River Valley home,” DeFreest said.

“There are so many people who helped and got things done. It was just AnneMarie and my mouths that did the talking. So many wonderful people deserve to be thanked,” Gulisano said.

He ended up purchasing the former Bridge Street Bakery business as well as the building and ran the Green Cup Cafe until Tropical Storm Irene in 2011.

“We’d been in Asheville for seven years and realized we needed to come up north to be with the kids and help Jason with the Green Cup. We fell in love with The Valley and Waitsfield,” Gulisano said.

“We came up and built an apartment in the building so we could come and stay. Then our youngest daughter, Lisa, and her husband ended up here. He got stationed in Burlington,” she said.

Gulisano described herself as a Jersey girl who’d never been interested in Vermont when she began coming here. Sam Gulisano had been head of marketing at FCB Advertising and had semi-retired when they moved to North Carolina – with a partner he had opened up a marketing company.