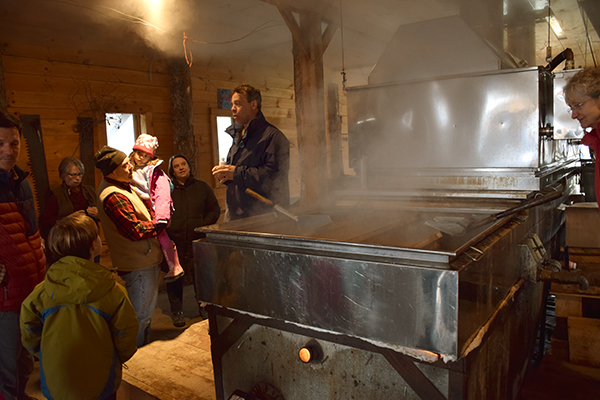 People were able to choose from a variety of maple products and watch two generations of Hartshorns boil sap and tell stories of sugaring in The Valley. Dave Hartshorn estimated nearly 500 participants came between Friday and Saturday.

Participants enjoyed riding in a cart pulled by oxen led by Kaleigh Hamel and watched syrup being made while learning about the history of maple sugar making and sampled freshly boiled syrup.

“We had this event to offer an experience for kids and also to provide some entertainment for our second-home owners if the skiing wasn’t ideal. We are looking forward to having larger events with more activities as time goes on,” said Dave Hartshorn, owner and operator of Hartshorn’s Organic Farm.

While moving his boiling operations to the farm stand and making maple products for neighbors and visitors has been a dream of Hartshorn’s for years, the make-it- happen moment arrived when the community began talking about economic vitality last year. Hartshorn was very involved in the Economic Vitality workshops this past summer and he became one of the lead organizers for the Mad River Valley Food Network that grew out of those workshops.

The Mad River Valley Food Network is a coalition of local food producers, retailers and dining establishments. As Hartshorn listened to the group talking about the local food movement, it was clear to him that there is a lot more here than people realize. He decided that he would hold an event around his biggest harvests to showcase some of what The Valley food system produces: maple, strawberry, blueberry and pumpkins. The Strawberry Fest will be held June 18 and 19.

Hartshorn had announced at an asset group meeting that he was looking to collaborate with any businesses that were interested. Flatbread, Lawson’s, Tonewood and Mad River Distillers were all vendors at the event and the Hyde Away, Mad River Barn, West Hill House B&B, Big Picture Café, Big Ridge Tavern and Grille, Peanut and Mouse, Three Mountain Café, Mehuron’s, Mad River Massage, Village Grocery, Whipple Tree Designs, The Collection, Irasville Country Store, Valley Arts and Sugarbush Soaring had off-site specials that were advertised on a large white board at Hartshorn’s sugarhouse. Hartshorn’s intent was to drive traffic to other Valley businesses.

“I am really excited about Dave’s Maple Fest because he listened to the local businesses that believe that our economic vitality rests in some part in events, and he delivered and he created this with true collaboration in mind” said Rebecca Baruzzi, executive director of the Mad River Valley Chamber of Commerce. “Dave’s event was so successful because he was truly driven by community interests and as a result people find him easy to collaborate with; his intentions are clear.” Baruzzi added.

Representatives were elected from each sector to discuss the results, and an open forum was held in December to share the findings publicly. The feedback from the workshops indicated that the biggest obstacles in The Valley for businesses were workforce shortages due to lack of affordable housing and transportation options, lack of identity around the sense of place and connections between Irasville and Waitsfield, lack of business support tools and lack of collaborative marketing for The Valley.

The Mad River Valley Chamber of Commerce is creating a professional development series for member businesses and a collaborative marketing strategy for The Valley. Additionally the chamber is positioning itself as a conduit of information for getting statewide information to its members and Valleywide information on events and businesses to the internal and external audiences. The planning district is working on options for affordable housing and transportation and the Waitsfield Planning Commission will be beginning their work on place making in May.