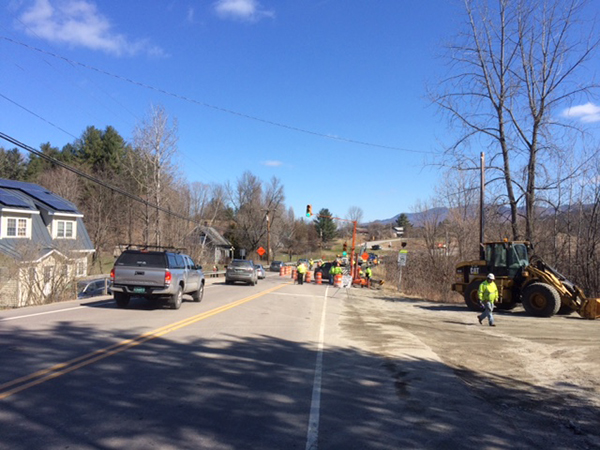 A large sinkhole that developed on Route 100 near the Crossett Brook Middle School driveway last week had the Vermont Agency of Transportation installing a temporary bridge at the site this weekend.

Last week the sinkhole developed in the northbound lane of the state highway where a large culvert carries Crossett Brook beneath the roadway.

The Vermont Agency of Transportation (VTrans) is installing the temporary Mabey bridge as the first step in the process of replacing a large failing culvert that carries Crossett Brook beneath the roadway. The temporary bridge will shift the centerline of the existing roadway several feet to the east but will still be within the footprint of the existing roadway. Ultimately the culvert will be replaced with a bridge. That new bridge is expected to have approximately the same centerline location as the existing road. 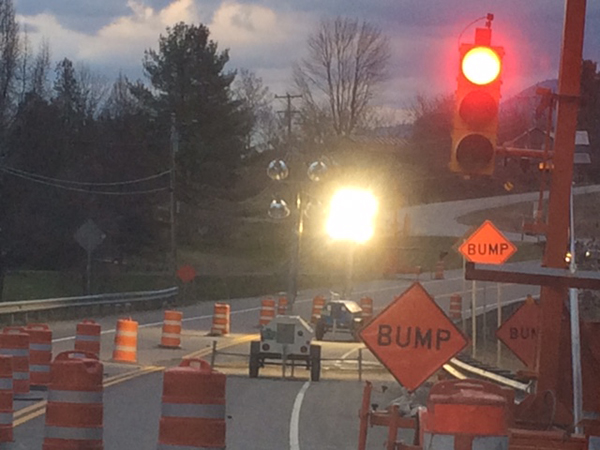 Recent inspections have shown significant deterioration of the structure and signs of cracking and sagging in the northbound lane pavement. Last week, Route100 was reduced to one lane over the culvert and a temporary signal was installed to assist with traffic flow.

"We have a project programmed already for the replacement of this structure,” said transportation secretary Chris Cole. “The recent changes in condition require we move on it a little sooner than anticipated."

The temporary bridge will be a two-way bridge. Earlier this week crews began work to install concrete barriers to better define the work area and lane width will be restricted to 10 feet until work concludes.

The VTrans bridge crew anticipates being able to maintain alternating one-way traffic during the assembly and installation of the temporary structure.

The failure of the culvert was not specifically anticipated, although VTrans is familiar with this type of failure where existing corrugated, galvanized, steel, multi-plate culverts are susceptible to corrosion and perforations along the bottom.

“This condition has been occurring statewide on a number of like structures over the years and is why the agency no longer utilizes steel culverts in these types of environments. The holes enlarge over time and can allow roadbed material to be piped “almost like a vacuum” from outside of the culvert creating voids in the roadbed above,” explained Richard Tetreault, VTrans deputy secretary.

“The condition transitioned more quickly than anticipated and that is why we monitor these structures through bridge inspections as on occasion some degrade faster than others,” Tetreault said.

He explained that replacing this culvert with a bridge had not been on the state’s formal schedule although work to replace it was expected to come into formal design and construction sequence in the next year or two. Because of that, costs for the temporary and permanent solutions have not yet been developed.

Tetreault said that VTrans had asked that the agency’s Accelerated Bridge Program Team expedite the design and construction of a new bridge, noting that the timeline was still being mapped out on expected delivery and installation of the new bridge. The VTrans Accelerated Bridge Program has replacement bridges built off-site and installed in pieces, reducing the amount of time that roads must be closed for the replacement work.