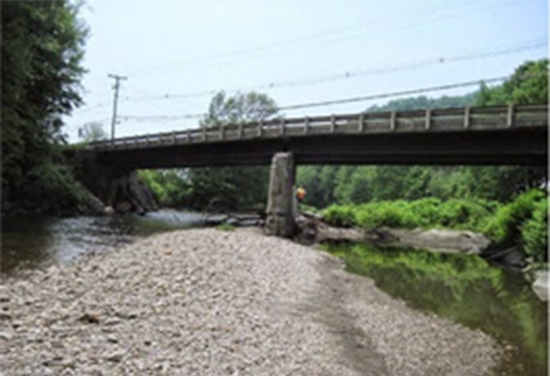 The Waitsfield Select Board has finalized plans with St. Onge Contractors to use the Munn field for staging materials when that company replaces the bridge over the Mad River on Route 100 between American Flatbread and The Elusive Moose.

VTrans is replacing the old bridge, which dates from 1938 and now is in poor condition. The new bridge will improve safety and meet current design standards. VTrans is using its new Accelerated Bridge Construction Program for this project, which means that rather than install a temporary bridge, deconstruct the existing bridge and construct a new bridge at the site, VTrans will build a new bridge off-site, close the road for 35 days and install the prefabricated bridge.

The road will be closed in mid-June and remain closed through the Fourth of July, reopening in mid-July. During the bridge closure period, traffic will be detoured from Route 100 to Route 17 to German Flats Road to Sugarbush Access Road and connect to Route 100.

The cost of the bridge replacement is estimated at approximately $4,220,668.

As part of the Lareau bridge reconstruction project, crews will make a bench cut in the northern riverbank in order to facilitate the creation of an underpass on which pedestrians and bicycles can cross Route 100 from Lareau Swim Hole to Lareau Farm. The underpass will someday create a direct and safe connection between the Austin Walk and the Revolution Trail at American Flatbread.

St. Onge Contractors has asked the town for permission to store some 2,200 cubic yards of material that will be removed during the Lareau bridge reconstruction. The road surface and subsurface material, known as waste, must be located where environmental restrictions allow. Because the Munn site has been used for this type of waste storage before, when the state repaved Route 100, it was suggested as a possible location for this project.

While the bridge is being replaced, American Flatbread/Lareau Farm Inn will also be reconstructing its entrance onto Route 100 to improve safety and sightlines. The new entrance will be close to the northern end of the field where its solar tracks are installed. The current entrance is very close to the current bridge, blocking sight lines and turning radii.

American Flatbread/Lareau Farm will be using some of this waste material in the construction of their road reconfiguration.

As part of its agreement with the town, St. Onge will use the Munn field, returning it in better condition than it was found and also crush and move the gravel stored at the Tardy site (across from The Elusive Moose) to the town garage, off Route 100 north of the village.