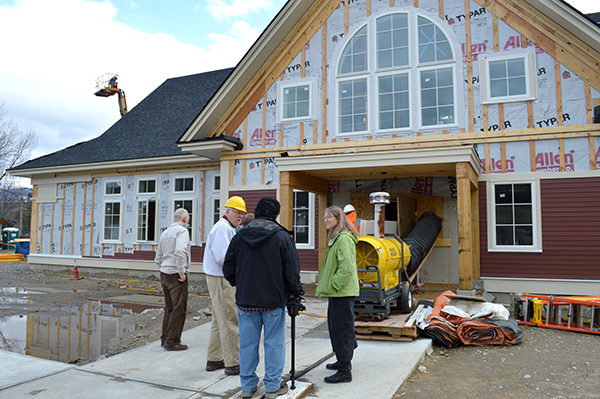 The Waitsfield Select Board has approved a conceptual plan for the revised West Village Sidewalk that includes on-street parking, crosswalks and a curb cut for the Valley Players Theater.

The new plan accommodates concerns expressed by village property owners as well as members of the select board. The board voted 4-1 on the plan at its April 11 meeting. Select board chair Paul Hartshorn voted against the plan, expressing concerns about proposed curb extensions and the town’s role in plowing, striping and maintaining them. Curb extensions extend the curbed area by crosswalks out to the edge of the parking lane, providing pedestrians with less distance to cover to cross the road.

The town applied for a 90/10 matching grant for a sidewalk to run from the Valley Players Theater to Farr Lane in 2013. Initially, the cost of the sidewalk was estimated to be approximately $400,000 with the town’s share coming in at $40,000.

“We’re asking the select board to approve the recommended conceptual alignment so that we can move forward with environmental review,” Kevin Russell, project manager, said. He noted that they hope to have the environmental review completed by this July and state right of way approval by this October.

“We’d like to get the final plans and specifications approved by VTrans next March and construct the sidewalk in May and June of 2017,” he said.

Russell told the board that the sidewalk advisory committee had been unanimous in its support of the current alignment and he said that this project provides the town with “more than just a sidewalk,” noting that it includes crosswalks, protective curbing, infiltration green spaces, pedestrian lighting, on-street parking, etc.

The plan now calls for two new crosswalks, one between Village Grocery and Waitsfield Wine Shoppe and one just south of the Valley Players drop-off/parking sites.

Joan Wilson, owner of Waitsfield Wine Shoppe, and John Gallagher, who owns One Man’s Treasure just north of the wine shop, expressed their approval of the plan as did Henry Erickson, speaking on behalf of the Valley Players.

Russell said that there were some issues with signs in the state’s right of way and said that project funds can be used to move several signs, including Gallagher’s at One Man’s Treasure and Ian Buchanan’s at Fit Werx.

As the project is currently configured there are several additions/alternatives that the town can add on, including creating green spaces that function as stormwater infiltration areas that have a sub-base that absorbs stormwater.

Several times during the meeting Russell referred to a budget analysis that he’d prepared for the board to review that spells out the costs of each of the add/alt ideas. Select board member Darryl Forrest clarified that currently those add/alt options would have the town spending $79,000 rather than the original $40,000 that was planned.

Russell noted that he anticipated being able to find and secure grant funding for some of the add/alts, hopefully reducing the town’s share to no more than $50,000.

“We really need to get this in front of VTrans so we’d rather have a detailed financial discussion with you at a later date. All the things we’re asking for permission to have Greg design and engineer can be removed or modified. We’re not planning on building this until 2017. You have one more Town Meeting during which you can ask voters for money or use capital funds for,” Russell said.

“Lighting is another add/alt we’d like to include. We’d like to have Greg be able to go forward with lighting for the terminus of each side of the crosswalks,” Russell told the board, explaining that the town could officially adopt the style of lighting found on Bridge Street as the town’s lighting to ensure that the Route 100 lighting matched it.

Finally he suggested that street benches be included as well.